By Edgefield Advertiser on June 3, 2014Comments Off on Scouts Hold Court of Honor and Bridging Ceremonies 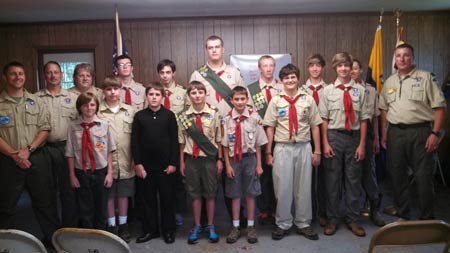 The Edgefield Scouts held their 2014 Court of Honor and Bridging over Ceremonies Saturday May 31. The Troop awarded Ranks and Merit badges earned during the year. The Boy Scouts earned a total of 18 Ranks and 53 Merit Badges for the year.

Troop 30 has participated in numerous community events over the past 11 months. Such as, Clean up around Barr Chapel Church, Serve Bar-B-Q at the Edgefield Heritage Jubilee, Help with Veterans’ Day Ceremony in Edgefield, worked on Staff at Knox Scout Reservation for the Cub Scouts Spook-o-ree, been in several parades, attended 2 Summer camps in 2013, And attended numerous camp outs and community service projects.
The Webolos II had 3 Cub Scouts to earned the highest rank possible, the Arrow of Light, and then Bridge over into the Troop.