Tim Worth Awarded in Carving Competitions

By Edgefield Advertiser on June 21, 2014Comments Off on Tim Worth Awarded in Carving Competitions 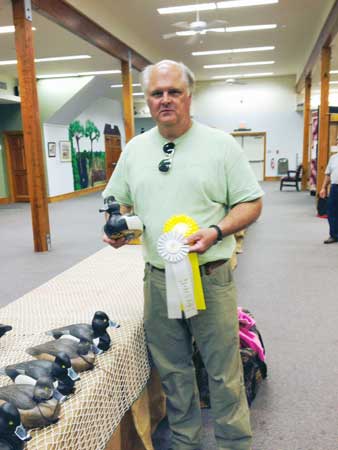 Tim Worth carved his first decoy in 1987 and has exhibited them in Edgefield in years past. In April, he competed in the Ward World Championship Wildfowl Carving Competition and won second in species with 2 black ducks in the Lem and Steve Ward Gunning Pairs.

This past weekend Core Sound Waterfowl Museum “Rig of Six” on Harkers Island, N.C., his Ring Neck’s took Second in Divers and Second in Best in Show and will be on display at the Core Sound Museum until September.

Also his “Rig of Six” Mallards took second in the Dabbler Division.

Tim and his wife Beth own what is known as Edgefield’s finest among the old homes, Halcyon Grove.  Some of Tim’s woodworking talent is displayed there, especially in the “school house” he built for granddaughters, on the grounds.  He works in a space he created on their home place on Buncombe St., Edgefield.