A New Writer Among our Correspondents

By Edgefield Advertiser on July 31, 2014Comments Off on A New Writer Among our Correspondents 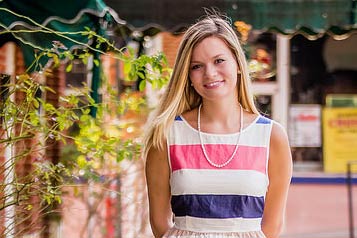 The Advertiser is celebrating a new writer coming on board. She is Kortlyn McPeek, who is fairly new to the area, her parents having moved to this county a year ago.

Kortlyn is an articulate, vivacious young woman, two years out of college, and eager to use her writing skills for this newspaper.

Our meeting was first through an email, then an interview in which she stated that this paper drew her interest. It came to their house through a special complimentary mailing. Her mother (her parents are Richard and Kamille McPeek) liked it and passed in on to her. Her reaction was: “God isn’t left out of this newspaper.” She saw that as very unusual. Also she spoke of a “genuine quality . . . real and fresh” that excited her interest.

And so this paper learned of her talent and invited her in. She majored in English at the University of San Diego and graduated in 2012. “I represent the phenomenon of recent graduates, of being underemployed.” She works at Publix, enjoys her work very much, but wants eventually to make writing more dominate in her career life.

Kortlyn says her interest in writing came in the grades six through eight, when she had an English teacher who promoted writing in many styles (including creative). It was at Aquinas High School (her family lived in Augusta before coming to this county) that she had a special teacher, A.J. Lloyd, who was an inspiration to her, and so her writing continued.

Now the Advertiser readers will have access to her writing through the news about Merriwether Community and her discoveries and experiences there. She is new, and she celebrates that in her first article, found in section two on the Correspondents page.

And to meet the rest of the family, Kortlyn has a sibling, Kristian, a DA near Dahlonega, Ga. She can be reached through her email for those wishing to give news or comment on her articles <kortlyn.mcpeek@gmail.com>