By Edgefield Advertiser on July 18, 2014Comments Off on Class of 1944, Edgefield High School, 70th Reunion 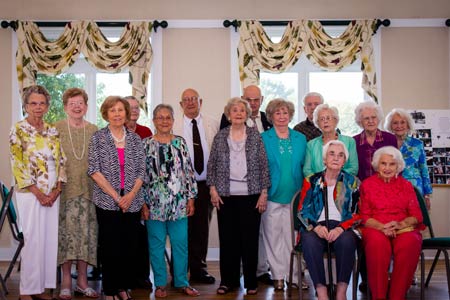 The Edgefield High School Class of 1944 held their 70th Class Reunion on Saturday, July 12, 2014, at the Pine Ridge Country Club. J. P. Calliham welcomed the class to the reunion and Betty Strom Carey gave a blessing over the prime rib dinner. Dot Ouzts Wofford called the roll after dinner with each in attendance giving a brief account of memories since their last meeting together. A special memorial table was set with names of the deceased class members and a time of silence as their names were called. Doris Hair Jovanelly named the committee members and how the reunion came to be. A poem was written and hand-made door prizes by Mrs. Jovanelly were raffled as well as each member receiving a copy of the poem. J. P. Calliham led the singing of the Alma Mater and Betty Strom Carey led in singing “Bless Be The Tie That Binds.” Following the evening’s events the class members said their goodbyes and talked of plans for another reunion in three years.