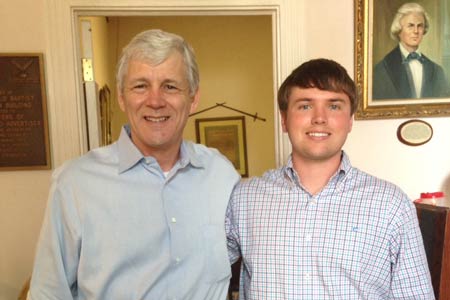 Recently, self-proclaimed “Independent Republican” candidate Tom Ervin stopped in Edgefield as he canvasses South Carolina in his quest to be elected Governor on November 4, 2014. Tom is a former legislator and state circuit court judge who is originally from Honea Path, but now lives in Greenville. He chose to forego the traditional party nomination route to elected office and has turned in over 20,000 petition signatures, which is twice the number necessary for him to appear on the November ballot.

When asked why he is running for Governor, Mr. Ervin states that it is about leadership and restoring trust and integrity to the office. He says that “sadly we have a situation in Columbia where there is no transparency and accountability.” He first cites what he terms “Governor Haley’s failure of leadership” in dealing with the security breach at the Department of Revenue which caused people’s identity to be stolen. Mr. Ervin says that the second failed test of Governor Haley’s leadership was the number of children dying while under DSS custody which “really infuriated” him and made him jump into the race late. He says he knows how to fix those problems and will if elected Governor.

One of the issues that Tom Ervin wants to address is term limits for elected officials. He says that we have too many career politicians and we need to go back to the citizen legislator and attract fresh blood. Ervin would like to see 1 – six year term for Governor, 4 – two year terms for the House and 2 – four year terms for the Senate. He would also like to revisit the current Legislative selection of judges to see if there is a better way that takes some of the politics out of it.

Another challenge facing our state is the crumbling roads and bridges which it has been estimated to cost over $29 billion dollars in the next few years to fix. While saying we need a comprehensive package to address these needs, Ervin says that we have to raise the gas tax, which hasn’t been raised in over 26 years.

He says we have the 4th most dangerous highways in the nation as over 1/2 of our primary and secondary roads are rated poor and over 1000 of our bridges are structurally defective. Mr. Ervin says this puts the public at risk and impedes economic growth and “must be addressed”. Further, he says all options should be considered including toll roads and fees which would be partially paid by out of state tourists. According to Ervin, “we have to start somewhere and it takes leadership.”

On education, Mr. Ervin supports what the General Assembly has done to require SC to come up with our own state standards with parental input instead of adopting national Common Core standards. Unfortunately, according to Ervin, a report recently found that 7 of the 20 worst school districts in the nation are in SC. He would like to give parents of children in failing school districts the choices to find alternatives such as home schooling, private school or parochial schools and that the money should follow the child. Also he would like for parents of special needs students to have the freedom to find an appropriate placement for their kids with the money also following the child.

In regards to higher education, candidate Ervin is concerned about the ever increasing tuition costs that are tough on parents and students. He would like to cap college tuition at the amount when a student enters college and keep it at that same amount for the entire 4 years. This is done in Texas and Mr. Ervin sees no reason it would not work in SC.

On jobs, Mr. Ervin criticized Governor Haley for practicing crony capitalism and picking winners and losers when handing out job incentives. He says SC has benefitted from an improving national economy and he is happy about that. However, he says our labor participation rate has not improved and a lot of people have quit looking for jobs. Ervin says rural areas such as Edgefield County have not benefitted like the larger, metropolitan areas of Greenville and Charleston.

Mr. Ervin says he does not want to be a career politician and has no desire for higher office. When asked what else he wants the people to know about him, he states that he is a conservative Republican who sponsored a balanced budget amendment while in the Legislature. He would like to phase out the individual income tax and also repeal some sales tax exemptions.

Ervin asks the voters to look at his record of being a pro-life, pro 2nd amendment small businessman who will work to restore trust in government. He says he will run a strong campaign against two career politicians and that he is in it to win it.