By Edgefield Advertiser on July 31, 2014Comments Off on Johnston Resident Retires from Military 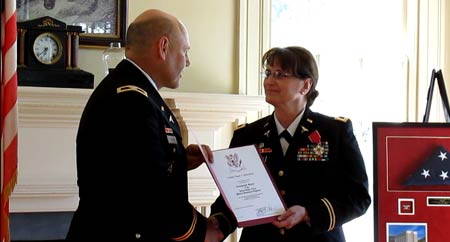 Family and friends gathered at the Greene County Historical Society’s Vaughn-Morrow House in Eutaw, Ala., on July 19 for the retirement of COL Cheryl Ann Elliott-Dawe from the United States Army Nurse Corps following more than 30 years of service. COL Elliott-Dawe and her husband Dr. Lloyd A. Dawe who is an employee of the University of South Carolina Aiken are residents of Johnston, SC. Following an invocation by the Rev. Rick Williams of Eutaw Baptist Church, it was noted that COL Elliott-Dawe continues a long family lineage of military service; she is a direct descendant of patriots who served WWII, WWI, the Civil War, and the Revolutionary War. A native of Eutaw, COL Elliott-Dawe returned home for her retirement in acknowledgement of the significant impact her church, community, teachers, friends and family have had on her life and career.

During the ceremony, COL Elliott-Dawe was awarded the Army Medical Department’s 30 year Medallion, and the Legion of Merit medal for exceptionally meritorious service by the presiding officers COL (R) MaryAnn Monteith and COL (R) Paul Kondrat, joining such notables as General Patton and General Eisenhower and heads of state who have been awarded this high honor. Other presentations included certificates and personal letters of appreciation from the President of the United States, Barack Obama; the Chief of Staff, United States Army, General Raymond T. Odierno; the Surgeon General and Commanding General of USAMEDCOM, Lieutenant General Patricia D. Horoho; and the Chief of the Army Nurse Corps, Major General Jimmie O Keenan. Following a moving flag folding ceremony conducted by COL MaryAnn Monteith; COL Paul Kondrat; MSgt Robert “Skip” Rozelle, Jr.; her father CPL William Elliott, Sr., a veteran of WWII; and her nephew PFC Josh Curtman, the national flag was presented to COL Elliott-Dawe in appreciation of her service to the nation. Certificates of appreciation and gifts were also presented to her parents, William and Minnie Elliott; her husband, Dr. Lloyd A. Dawe; and her children Ashley, Graeme, and Jeffrey who were in attendance.