By Edgefield Advertiser on July 15, 2014Comments Off on State Antler Records Down Slightly This Year 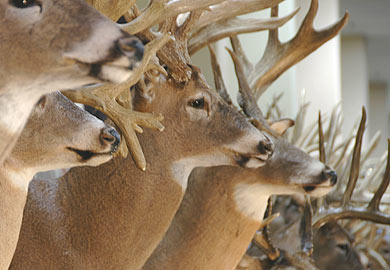 The most recent round of white-tailed deer antler measuring conducted by the S.C. Department of Natural Resources revealed 222 new records, including one Boone and Crockett qualifier.

Each spring S.C. Department of Natural Resources (DNR) Wildlife Section personnel make a concerted effort to measure deer racks throughout the state, with a major session during the Palmetto Sportsmen’s Classic in Columbia. Of the 569 sets of antlers measured this spring, 222 met the minimum score for entry on the state records list including 213 sets of typical and 9 non-typical racks. According to Charles Ruth, Deer/Wild Turkey Program coordinator for DNR, although not as strong as the past couple of years, the number of successful entries into the records list this year is the third highest number of entries in the last 10 years. Although all of the records were not taken during the 2013 season, 182 were taken during the 2012 or 2013 season. Racks must score a minimum of 125 points typical or 145 points non-typical to qualify for the South Carolina state records list. Records are based on the Boone and Crockett Club scoring system, which measures the mass and symmetry of deer antlers in two categories—typical and non-typical.

Kershaw County was this years’ top producer of State Record entries with 15 followed by Aiken County, which had lead the state the 3 previous years, with 14. Other top counties included Orangeburg (10), Calhoun (10), Fairfield (9), and Dorchester (9). These results come as no surprise as these counties have historically produced good numbers of record entries.

Although some of the top counties have relatively high deer populations, some of these counties have more moderate numbers. It is important that hunters and land managers understand how the density of deer in an area affects the quality of the animals. Areas with fewer deer typically have better quality animals because natural food availability and nutritional quality is higher. Good nutrition is important in producing good antlers, but deer reproduction, recruitment and survival are also directly tied to nutrition.

As far as all-time leaders at the county level, Orangeburg County remains at the top with 457 sets of antlers on the list. Rounding out the top five counties Orangeburg is followed by Aiken 435, Fairfield 264, and Anderson and Colleton each with 246. On the other hand, if you account for the size of the county the top counties per unit area of harvest are Anderson, Abbeville, Orangeburg, Allendale, and Aiken.

Currently 6,389 sets of antlers (6,147 typical and 242 non-typical) are included on the South Carolina antler records list.