Children’s Musical, the “Wizard of EDgefield”– an Original Script

By Edgefield Advertiser on August 7, 2014Comments Off on Children’s Musical, the “Wizard of EDgefield”– an Original Script 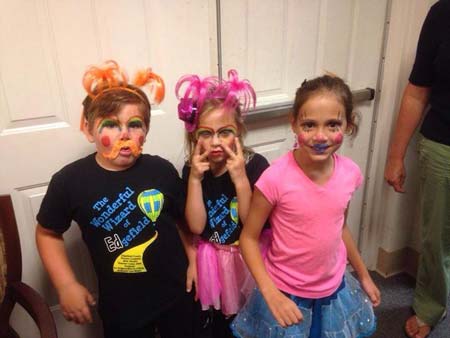 The Edgefield County Theatre Company hosts a Theatre Camp each summer when children from over the county have the opportunity to put their talents on stage. This summer the directors, Caroline Bland of Edgefield and Susan O’Neal of Johnston, collaborated on an original play, patterned after the famous Wizard of Oz – but instead of Oz, there was Ed.  The title of course is “The Wizard of EDgefield.”

Children from over the county, ages five and above, were transported by parents and grandparents (some were from out of town and were visiting their local grandparents) each day for two weeks to the Discovery Center and the William M. Bouknight Theatre.

The T-Shirt on the two Munchkins in the bottom photo, above, signaled the camp play and focus, and children wore their shirts each day. However, on Thursday of the last week, they changed into costumes, which suggested great drama – witch hats, dark flying monkey suits, munchkin tutus, and the lion and the tin man, looking suitable in a mane of gold and silvery in a suit of tin.

The performance was full of dance and song, ending with a slide show of Ed on a trip around the world; he returned just in time to save Edgefield from the Wicked Witch and her cohorts.

Dramatists, it could not have been better!  How clever to originate Ed of Edgefield.  Will ED eventually be a part of Edgefield lore? Possibly.