The ALS Challenge Hits Our Area – JET Takes the Challenge

By Edgefield Advertiser on August 27, 2014Comments Off on The ALS Challenge Hits Our Area – JET Takes the Challenge 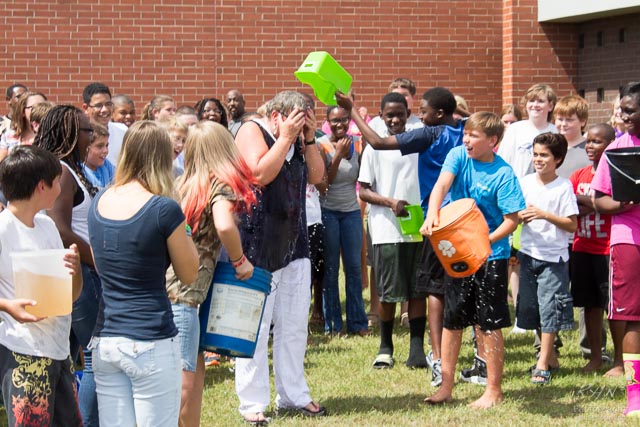 The ALS Challenge (a focus on fundraising) has swept the nation with challenges met in every corner of the land, including Edgefield County and the Ridge.  The media reports that over 4 million dollars have been raised in this effort. One only has to check social media, Facebook, to find both local and national videos of “volunteers” who have been challenged to pay $100.00 or be showered with a bucket of ice cubes in water (and often they do both). It is friends who do the challenging.

And the dousing hurts, one can tell, by the sudden fleeing from the scene as the “volunteer” is doused with wet and cold, their faces and “yelps” showing their discomfort.  Yet, they keep on meeting the challenge, all to add to the ALS coffers – money that is needed to find a cure for the dreaded “Lou Gehrig’s Disease.”

One of the county schools, JET Middle School, took up the challenge, appointing their Assistant Principal Debbie Courtney to take the ice – and she did.

What they were not expecting was to be hosed then by the Edgefield Fire Department.  The students thought the men were there to fill their buckets.  But instead, the water poured on until everyone was as wet as Ms. Courtney.

They have now challenged Merriwether Middle and the District Office.