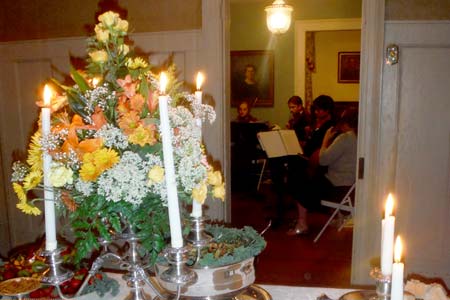 On an evening during a whirlwind weekend when ballgames, a play and family events were a distraction, the Edgefield County Historical Society hosted about 75 people from the citizenry to help in a celebration of its 75th year in operation, Friday, September 12. Numbered among the guests were out-of-towners whose lineage is associated with founding members of the society and they brought an extra enjoyment to the party, called a “gala.”

Two special features of the evening were, first, the string quintet which came from Augusta to fill the halls of Magnolia Dale with background music (and a special birthday number), gathered in a semi-circle in front of the house museum’s back, double-door entrance. They inspired a few to dance.

Next was a spread of food from several Edgefield cooks in our midst: a salad from Bush’s Delectable Delights, beef tenderloin from the Olde Butcher Shop and shrimp/grits and trimmings spread on the dining table from Jolea Jones and her crew of the Edgefield County Hospital.

Here one must mention the flowers arranged by Clarice Wise, a real protégé of her late father (D.L. Wise) who was a famous gardener: a beautiful clutch arrangement of white ginger lilies in the parlor and the mixed flowers in the five-light center candelabrum on the dining table.

A silent auction of two prized pieces of pottery by Justin Guy, both with the date and occasion embedded in the design, gave two winners gifts to remember the evening by.

Most of the guests, dressed in black-tie (optional), enjoyed mixing and mingling with guests who included two outstanding South Carolina authors, Dr. Walter Edgar and Dr. Vernon Burton. Their connection to Edgefield would be found, of course, in its history, binding all present in a celebration that started with a group of men and women in 1939.  The founding group sought to document and celebrate one of Edgefield County’s richest features and one the Society today has invested much time and energy in holding to that effort.

The Grande Dame at the event was Mrs. Helen Carpenter of Trenton who greeted guests from the love seat in the hallway of Magnolia Dale.

Guests from Columbia were Norrie (Nicholson) Cooper (mother was daughter of the late Mr. and Mrs. John Nicholson and the great granddaughter of Mamie Tillman whose home was Magnolia Dale) and her husband Edwin Cooper (who has family connections in the County as well through the Watson family) ; Nina (Nelson) Smith and her husband Jim; and Dr. and Mrs. Walter Edgar (Nela).  Dr. Edgar has recently retired from USC as Professor of History, and Chair of the Southern Studies Department.  (Norrie’s father and Nina’s Mother were siblings of Lady’s father, who all grew up in Edgefield).  John Nicholson Harrison (Mother was Sarah Nicholson of Edgefield) and his wife Tricia came over for the evening  from Columbia; also, Elizabeth Hodges of Mt. Pleasant, daughter of Judge and Mrs. Hodges, was in attendance.

Other out of town guests were Dr. and Mrs. Cantey Haile (Columbia); Dr. Haile is a Brooks descendant; he recently spoke to the OEDGS and visits Edgefield often.  Noted historian who is Professor of History at Clemson, Dr. Vernon Burton, and his wife Georgianna attended the event also.  Traveling from Athens, Ga., came Lydia Derrick Wherry (Mrs. Scott) also.  Numerous others from Aiken, Augusta and other areas joined many Edgefield residents for the Anniversary celebration.