By Edgefield Advertiser on September 9, 2014Comments Off on Old Edgefield Grille Reopens Under New Ownership 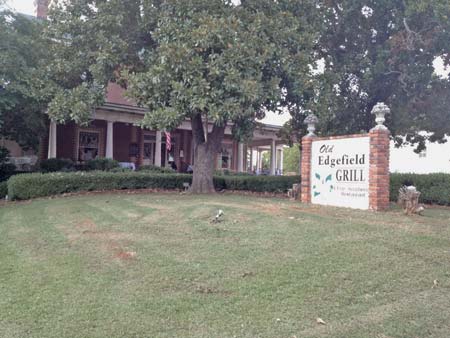 In a brief interview today with Travis Bethune, the new owner and chef of the Old Edgefield Grill, he was excited to announce his ownership of an old favorite among restaurants, located on Penn Street in Edgefield.

Word passed quickly last week among citizens, that Edgefield had lost a favorite eating place, a fine dining restaurant where ladies lunched on seared salmon and evenings were astir with four course meals.  The restaurant closed abruptly to numerous stories, but rather quickly, through negotiations with former owner Bettis Rainsford, produced a new owner, but not necessarily a new chef.

Travis Bethune was at the restaurant under Sean Wight, and later replaced him as  chef, and now he is back.  He opened, today, Tuesday, unannounced, and was happy to serve a number of people.

In this interview he was on his way toward the city by the river to pick up supplies.

To the citizenry of Edgefield County and the Ridge, Old Edgefield Grill is back in business!