By Edgefield Advertiser on October 30, 2014Comments Off on Kalei Bowser on Clogging Team 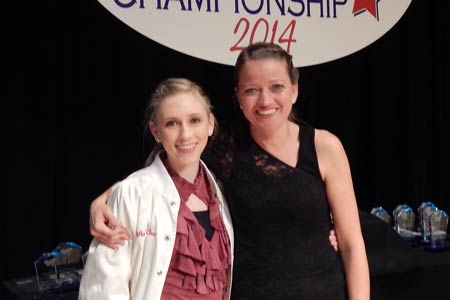 Kalei(L) is pictured below with her dance director (Mamie McAbee-R) from Rhythm and Class Studios in North Augusta. Kalei is a freshman at Anderson University and is a 2014 graduate of Strom Thurmond High School.

The celebration consisted of the All American clogging team performing a Hoedown after they each received special recognition and jackets.  The announcement came on Saturday afternoon.  The competition concluded on Sunday afternoon.

Clogging was an activity Kalei fell in love with by the age of 5.  Rhythm & Class Dance Studio have taught her far more than just the abilities to dance.  The experiences shared there have formed bonding friendships that will last and be treasured for a life time. The dance team is much more like a dance family.