The Old Hotel Seems Asleep, Waiting to be Awakened

By Edgefield Advertiser on November 14, 2014Comments Off on The Old Hotel Seems Asleep, Waiting to be Awakened 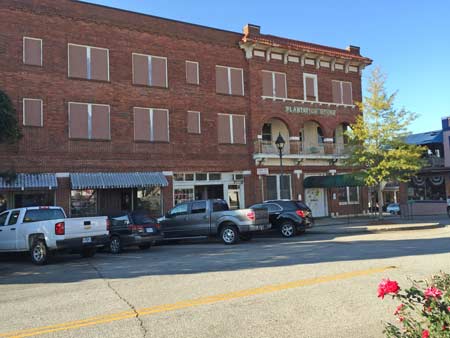 The Edgefield Hotel seems to be sleeping now, with its new window treatments. These closures were given the windows as a protection from any falling pieces.

Like the Phoenix, it has risen up from disrepair (not quite ashes) several times, and with its new windows the building seems to be sleeping, waiting for the next renewal.

In years past it was a hotel for overnight guests, a meeting place for the community, and a place for some to take rooms for a while. There were also businesses in the lower front areas. In the 30s and 40s there was a funeral home storefront and a beauty shop.

One of the owners during this time was Strom Thurmond, the late Governor and Senator. In 1963 it came under new ownership and was completely redecorated. The brick building behind it was built to handle the veterans who resided there and on the second floor above the entrance and lobby resided some of the distinguished ladies of Edgefield.

In 2007, the hotel was sold to Plantation House LLC, which gutted it with promise of a restored building. Now a nonprofit group, the Civic League, is working toward ownership.

The Civic League is an organization that has been active in Edgefield since 1928, with a mission “to promote the Town of Edgefield.” The Civic League also has under its direction the Tompkins Library and Welcome Center, and is working valiantly to raise funds for a roof for the library building as well as the salary of the library director, Tonya Browder Guy. In years past the County Government allotted some funds for the League as a way to help with their expenses, but a turn in the tide of leadership has brought an end to that funding.

In spite of struggles, the Civic League is remaining positive about the hotel building. According to one of their spokesmen, they have several committees working and at least one of these groups meets weekly to continue the work of trying to fund a rehabilitation of the building. Their hope is for a hotel that can improve the living environment of the town and be welcoming for guests to the Town of Edgefield.

“There is a lot of talent on the board (working groups),” says the spokesman. “These members are seeking the opportunity to put something there of value for the town and of use to the community” – their goal as they continue working to save the building on the square.