Kenneth Kaltz, a New Student Writer for the Print Edition

By Edgefield Advertiser on February 10, 2015Comments Off on Kenneth Kaltz, a New Student Writer for the Print Edition 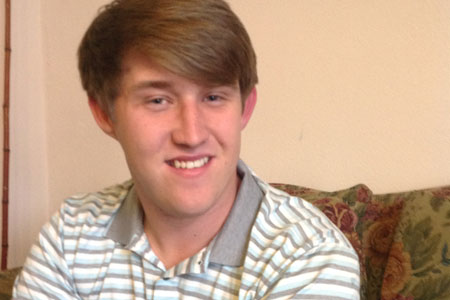 February 10, 2015 – “That is where it all began,” says Wardlaw senior Kenneth Kaltz. He was speaking of what has influenced his interest in writing about sports, and that “where” was his first Clemson game, when he was 6 years old.

From then on, he would get up in the morning to watch the sports news before going to school. Asked if this ever interfered with getting to school. He says: “I have never been late for school.”

There it is, a young man with dreams and aspirations and the discipline to follow through. He says anytime he was given a writing assignment and he could choose the subject, it was sports. And it is easy to figure the kind of grades he got on these assignments, because he had his teacher/mother Dana Kaltz coaching him at home. And in him was a strong passion for the subject matter.

Kenneth wants to take his writing and interest in sports to his choice of schools – no need to guess – Clemson, where, if he matriculates there, hopes to major in the Professional Golf Management Program. If so he will be following in his father’s (Kurt Kaltz) footsteps. Kurt is General Manager at Pine Ridge Club and Kenneth expects his dad will be a great help in his future career.

There are others in Kenneth’s life – a sister in the 7th grade at Wardlaw, and a grandmother, Pat Kaltz, here in Edgefield.

Kenneth came to us through a phone call. He used to follow Miller Thompson in this newspaper every week, and considers him a friend, and when he saw he was leaving, he thought this an opportunity for him.

Kenneth is an impressive young man, mannerly in his approach and full of passion in his desire to work in the sports world. He is on the golf team at his school and has played basketball. When asked if he could name one person, outside his family, who has inspired him, he jumped at the chance to tell about Mr. Roger Baker who comes to Pine Ridge every day and sits and talks with Kenneth about sports and sports happenings. “I go every day,” says Kenneth.

Find Kenneth on page 5, in the February, 11 print edition.