By Edgefield Advertiser on March 24, 2015Comments Off on Historical Society to Dedicate Caretaker’s Cottage at Horn’s Creek 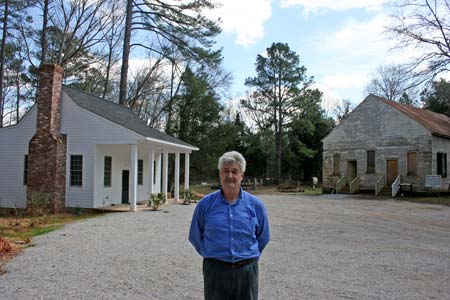 March 24, 2015 – The Edgefield County Historical Society will dedicate its new caretaker’s cottage at Horn’s Creek Church at its Spring Meeting this coming Sunday, Palm Sunday, March 29, 2015 at 3:00 p.m. The dedication ceremony will include a blessing of the cottage by several local clergymen, led by the Rev. Tom DiMarco of the Episcopal Church of the Ridge. A barbecue supper for all attendees will follow the ceremony. The public is invited to attend.

The caretaker’s cottage was built in order to stop the vandalism from which this historic church and cemetery has suffered over the years. The Society now has a caretaker living on site in the cottage. That, together with alarms and surveillance cameras, should ensure that no further vandalism of the church and cemetery will occur. With the cessation of vandalism, the Society will now embark upon the restoration of the church building.

A year ago, at the Society’s 2014 Spring Meeting, a groundbreaking ceremony for the cottage was held along with a Palm Sunday service in the church. More than 150 persons attended this colorful meeting. In the months since, the cottage has been built and is now fully completed. During this same period, much of the cemetery has also been restored due to the hard work, oversight and generosity of Society Vice President Clarice Wise.

The new caretaker of the Horn’s Creek Church property, Barney Dunbar Lamar, moved into the cottage several weeks ago. He is a native of Beech Island and is descended from several of the oldest families of the Old Edgefield District. A graduate of Emory University, he lived in Germany for seven years where he studied restoration techniques for fine arts and completed an apprenticeship program. After returning to America, he spent ten years doing restoration at the Biltmore house in Ashville, North Carolina. Mr. Lamar then opened his own company, Fine Art Restoration, through which he has done restoration projects all over the country. Mr. Lamar will be working with the Society on the restoration of Horn’s Creek Church. The Society is very fortunate to have found someone of such remarkable talents to assume the position of caretaker at Horn’s Creek.

Horn’s Creek Baptist Church is one of the oldest – if not the oldest – structure standing in Edgefield County. The church was founded in 1768 and the present church building was built in the years following. It is known to have been standing in 1784 but may have dated from before the American Revolution.

The Church was founded by the remarkable evangelist of the eighteenth century, Reverend Daniel Marshall, a Connecticut native who founded “Separate” Baptist churches in North Carolina, South Carolina and Georgia. Marshall’s first church in Edgefield County was Big Stevens Creek Church which he founded in 1762. Horn’s Creek Church followed in 1768 and then he moved across the Savannah River to Georgia where he founded Kiokee Church in Columbia County in 1772.

At last years’ service a book entitled The Early History of Horn’s Creek Baptist Church was distributed which provides a detailed account of the early history of the Horn’s Creek neighborhood and church through the Colonial, Revolutionary and Early National periods. Copies of this book are available from the Edgefield County Historical Society.

One of the oldest county historical societies in the state, the Edgefield County Historical Society is dedicated to (1) researching, preserving and disseminating information about the history of Edgefield County, including all of the area which was once part of the Old Edgefield District, (2) preserving historical sites and structures in the county and (3) promoting historical tourism throughout the county. Last year the Society celebrated its 75th Anniversary. The Society’s 2015 membership drive is now under way and all interested parties are urged to join. The Society can be reached by calling 803-637-2233 or by writing to the Society at P.O. Box 174, Edgefield, SC 29824.