By Edgefield Advertiser on March 16, 2015Comments Off on STHS Mock Trial State Champions 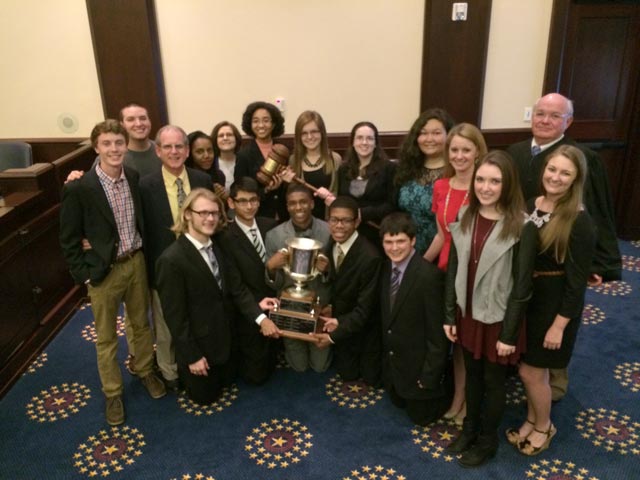 At the state competition students presented the prosecution and defense sides of a fictitious criminal case before a panel of volunteer lawyers and judges. This year’s case focused on a university student’s role in the research of security threats and ultimate hacking of a retailer’s website. As a part of the case, students discussed financial transaction card fraud, financial transaction card or number theft and computer crime. Students filled the roles of attorneys, witnesses, bailiffs and timekeepers, and each team was judged on its presentation skills, rather than the legal merits of the case. The students presented the same case at the qualifying regional competition.

Individual winners for best attorney were Jamarr McCain(3) and Arturo Pineda(1) and for best witness were Keyson Whiteside and Royden Watkins.

Team Teacher coach Ms. Denise Jackson describes this year’s team in the following way,” Relentless, totally focused. The team was nearly all seniors and veterans.” And when asked about the community’s support of the team, “Parents are extremely supportive. When the civic and business community are aware of our needs they are supportive, too.”

Ms. Jackson also said special recognition should go to Attorney Blair Massey, wife of Senator Shane Massey, without whose legal tenacity the team could not have won.

When asked how Mock Trial had impacted his life Team co-captain Jamarr McCain stated,”Everything! Mock Trial has made me a better public speaker, a better team player and even a better citizen who understands the American legal system.”

Congratulations to the team and coaches.