W.E. Parker Portrait Will Hang in School Named for Him

By Edgefield Advertiser on March 2, 2015Comments Off on W.E. Parker Portrait Will Hang in School Named for Him 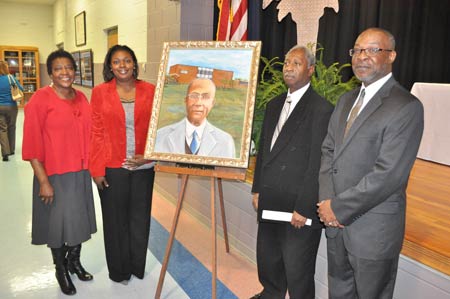 A responsive audience, many discovering the attributes of educator W. E. Parker for the first time, gathered to give a salute to a 20th century leader in education in Edgefield County. Among the interesting portions of the program, led by Supt. Greg Anderson, was the period of responses from the audience who took the mike and reminisced about their former principal and sometimes neighbor (he lived on Wells Rd., Edgefield.)

The school, W. E. Parker Elementary which was named for the educator, hosted the event, and the stage was lined with participants on the program as well as Edgefield Board of Education members. (They held their regular meeting immediately following the program, at the school.)

So many remembered Mr. Parker as a caring individual, interested in his student body. Others were more centered on the building named for him and how it was when they first moved there in 1954 (It was then called Edgefield Colored School). The former school buildings (photos can be seen on line edgefieldadvertiser.com) were in the Macedonia community and burned prior to the building of the W.E. Parker school. Respondents at the event spoke of being in awe of the new school and feeling such pride in it. One person stated: “I don’t see our young people feeling the pride in their school that we had.”

The audience, other than teachers and officials, were mostly of the age group who graduated from W.E. Parker before integration, at which time it became the present elementary school for Edgefield.