My Observation of Round Three of the National Mock Trial Competition

By Edgefield Advertiser on May 21, 2015Comments Off on My Observation of Round Three of the National Mock Trial Competition 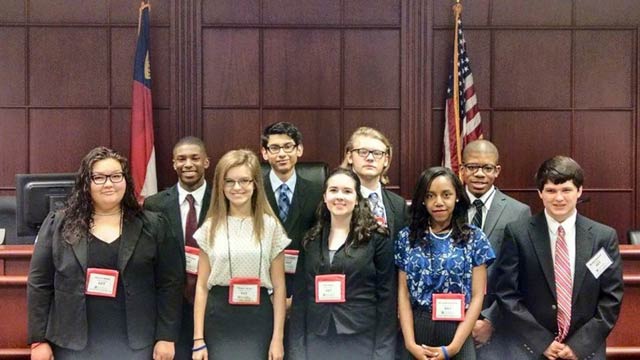 Early on Saturday morning at the Wake County Courthouse in Raleigh, N.C., Strom Thurmond High School’s mock trial team waited to face yet another team at the national level of competition. They could face a team from another state or from Guam or even one from South Korea. Before the round started, the two teams within the courtroom were friendly with each other, but once they each sat down at their separate tables, the air seemed to change. Round three was swiftly approaching.

After the judge and jury entered, the witnesses were sworn in, teams introduced themselves and announced their individual roles, and everyone — even Thurmond’s traditionally lighthearted team — got serious. Over the course of the opening statements (Arturo Pineda delivered the defense opening for Strom Thurmond High School.), the two teams informed the jury of the facts of the case — each maintaining a blatant sense of bias toward their side. The Plaintiff, which was the opposing team for that round, then began to call their witnesses for direct examination (being questioned by his or her attorney in order to make their case look good) and cross examination (being questioned by one of the opposing side’s attorneys in order to make the case presented on direct look bad). Strom Thurmond’s Defense attorneys did their very best to insure that any supporting points that the Plaintiff put together on the direct examinations of the witnesses was undone on cross. As soon as the Plaintiff’s three witnesses finished their consecutive testimonies, the Defense began to call their three witnesses to the stand one at a time (These witnesses were portrayed by Delshawn Anderson, Keyson Whiteside, and Royden Watkins.). The same direct and cross examination process followed.

A complex story involving gung ho Revolutionary War reenactors, the North Carolina Bill of Rights, a steep stairway, a really fast teenager with a bayonet, and the equivalent of a mall cop with a TASER was stitched together, fact by fact, as the trial progressed. As if all of that was not entertaining enough, there were some Facebook messages with the Illuminati thrown in there too. The people in the courtroom were drawn into the story, with two different points of view vying for the jury’s favor, and Strom Thurmond’s team was determined to win that jury tug-of-war.

The final phase of the trial began with the Plaintiff’s closing argument. Once their attorney sat down, Jamarr McCain walked over and stood directly in front of jury and began to destroy, bit by bit, the Plaintiff’s case. After that, the Plaintiff attempted to build their entire case back up with a rebuttal, but they did not have much time left over from their closing argument to do so. All in all, it was a nice round, and Thurmond performed wonderfully (I later learned that they had won that round). They represented both Strom Thurmond High School and South Carolina well with their professional presentation of the case. At the end of the entire competition, they were in twenty-first place in the nation and had a two-to-two record of wins to losses. This county — and the entire state of South Carolina, for that matter — should be so proud of the Strom Thurmond mock trial team’s performance in the national mock trial competition.