“You Are With the Honor Flight?”

By Edgefield Advertiser on May 21, 2015Comments Off on “You Are With the Honor Flight?” 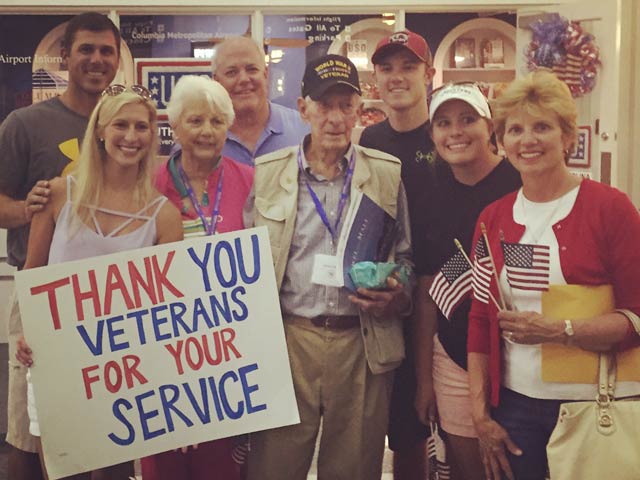 Everywhere they went they were asked, “You are with the Honor Flight?” It was a trip of a lifetime, according to Dr. Jim Hawk who was one of over 70 WWII veterans who took the flight from Columbia recently to visit the memorials in Washington, D.C., to return the same day. According to him, there was patriotic fervor going and coming, with patriotism expressed in everything from decorations to dance.

Dr. Hawk was accompanied by June Covar who on this day was his “guardian.” Every member of the flight had to have one, and if someone showed up without a person to accompany him, ROTC students stood in as guardians. According to June, they were instructed how to perform in their duties: one duty was to always walk behind their charge.

It was 6 a.m. when they arrived at the airport, to be treated to coffee and accompaniments as they awaited the flight which left at 9:00. There were many people at the Columbia airport seeing them off with pomp and circumstance.

The number on the flight was around 192, which included WWII veterans, Korean veterans, medical personnel, as many guardians as veterans, and hosting people who gave great care all along the way.

“Everywhere we went there were decorations of red, white and blue,” said honoree Hawk. In fact the honorees were color coded: he and his guardian were ‘white’ so that everywhere they went it was easy to know their place. ”This was one of the best organized events,” according to Hawk, “which continued throughout the whole day.”

It was decided, interviewer to interviewee, not to even talk about the memorials in this article, which are several and are known to most folks. It was noted by June that not one veteran chose to stay on the bus when delivered to the memorials – not even those in wheelchairs. It was full participation all along the way.

Whenever they got onto the bus, once reaching D.C. through Reagan Airport, they found a box lunch, which got repeated later in the day between memorials. “Food and treats were there at every turn,” they noted.

At one memorial they were greeted by three women who were touring, sisters from one state, who had dressed as women did in the 40s to add to the interests of the day.

A special of the day was the outstanding Medal of Honor winner, Kyle Carpenter, now a USC student, who greeted them and spoke with them along the way: ”If it were not for you veterans I would not be here today.” He reassured them in a handshake with his artificial limb and hand, a the ring finger holding his ring given with the medal.

With the celebrations at each stop, including three bands playing, energy was high among the honorees without any incident to report of illness or problems. (Dr. Hawk’s energy continued through Sunday when he attended his grandson’s graduation from Camden Military School, another patriotic observance – his daughter’s younger son, Lee Marion McCabe.)

There was some time in the interview with Hawk on Monday to reflect on his military duty that placed him in line for this Honor Flight. He served under Gen. Patton in the Battle of the Bulge and was wounded in the shoulder (in Germany) in doing reconnaissance with two other soldiers. This wound took him to Paris for treatment and then to Oliver General Hospital in Augusta, Ga. This made him both a veteran and a Purple Heart recipient.

The day of the flight was long, but the memories are lasting. They were met at the Columbia Airport by June’s family – the Brad Covar entourage, children and all. That meant one more meal before going home!