By Edgefield Advertiser on July 14, 2015Comments Off on Rural Health Students Visit ECH 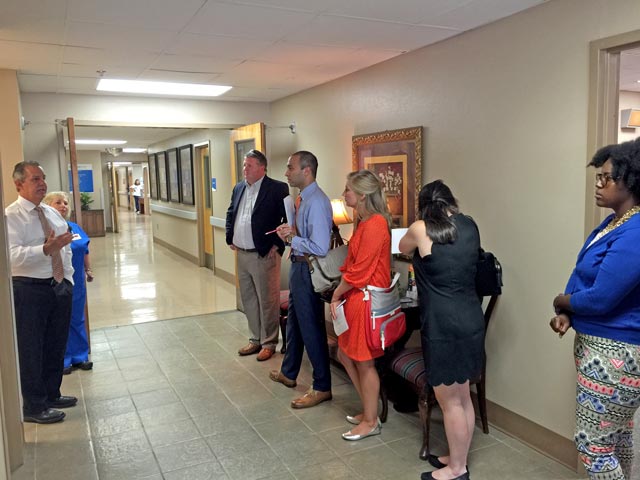 Rural Health students, ones included in a class taught by Graham Adams and Amy Martin, were welcomed by EC Hospital temporary CEO Carlos Milanes and Head Nurse Cheryl Faust on Friday before they toured the hospital building and grounds.

CEO Milanes characterized the hospital as a Critical Care Hospital with up to 25 beds and a Swing Bed option for patients who need further care while recovering. There is some flexibility between the two as described by Milanes. Students from varying locations over two states were asking questions as they sought information on how people are cared for in the rural setting of Edgefield County, and beyond. This was a short course according to Adams and would include just this one hospital visit, that in Edgefield.

“How we take care of each other” was one response of a Ph.D. student to the question of what is meant by Rural Health. The “we” (rural) is the populace that is often characterized with poverty and unemployment. They would be looking for what are the needs of this populace and how are those needs are met.

Graham Adams, who is CEO of SC Office of Rural Health, said these students chose this class as a part of their larger study for a degree in several subjects, two being a Ph.D in nursing and a pharmacy degree. All the students’ course work is at the University of South Carolina. The co-teacher for the class, Amy Martin, works out of both MUSC and USC. The School at USC which is housing this course is Arnold School of Public Health.