By Edgefield Advertiser on August 17, 2015Comments Off on Jamarr McCain Makes History 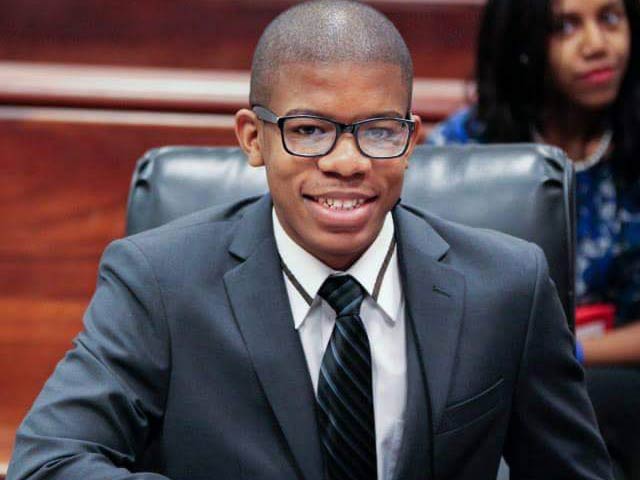 The competition was sponsored by the Future Business Leaders of American (FBLA) and featured a student who was put in a real life situation applying for a job. The student would enter the interview room of a make believe company and then was interviewed by representatives of the company in the same way that companies today perform interviews for job applicants. The “representatives of the company” were actually the judges for the competition.

The students were judged on the basis of their appearance, mannerisms, introductions, responses to questions, clarity in answering questions, loudness and tones of voice, and other relevant factors incident to a job interview.

Jamar previously represented Strom Thurmond High School in the state competition for the state of South Carolina and finished second. The top three contestants from each state advanced to the final round of competition in which students from all fifty states plus the countries of Puerto Rico, the U.S. Virgin Islands, Cayman Islands Canada, and China competed against each other.

After the first round of the competition, Jamarr scored high enough to advance to the final round of the top twelve contestants. From there Jamarr finished second for the entire competition.

Finishing this high in this competition is a first for any student from Strom Thurmond High School or from the state of South Carolina.

According to the school district, Jamarr is an outstanding student and this competition demonstrated not only Jamarr’s talent but also his fierce competiveness.

As one might imagine, it was not easy for Jamarr to obtain such an elite status. “This was my first time in the past three years making it this high in the competition. Just like how much time and dedication it took for our mock trial team to win the state championship, it took just as much for this competition. The fact that I made it for a third consecutive year to that level of competition and placed so high is a testament to the hard work and commitment displayed by Mrs. Michelle Smith.” Jamarr stated.

Jamarr had practice sessions with Michelle Smith, adviser of the FBLA at Strom Thurmond as well as other students and teachers. Board members and spouses of board members as well acted as judges and practiced a trial competition with Jamarr and provided a critique at the conclusion of the practice.

“Jamarr was extremely motivated” said Board Member Robin Ball “and he seemed determined to give it his best shot. We like to see this in students and hope that Jamarr will be an inspiration for others to follow.” Ball concluded.

Added to his obvious talents demonstrated in the competition and his competitive nature, Jamarr is also both humble and appreciative. “I want to thank God, my family, Mrs. Smith and everyone who helped me reach this peak. You all helped me end high school with a boom! The Edgefield County School Board continues to be an asset to its students. Their panel interview of me helped provide the tools for my success. They truly believe in preparing students for the real world the right way!”

Jamarr is one of those rare individuals you meet once or twice in a lifetime. And now, people from all over the world have seen this rare individual from a small school and believe this as well.