By Edgefield Advertiser on August 2, 2015Comments Off on Piedmont Technical College will be Holding Two Summer Commencement Exercises on August 6 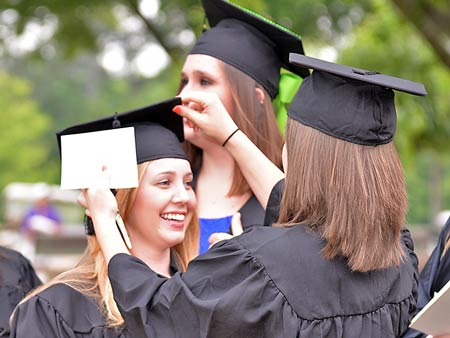 Due to limited seating, tickets will be required for all guests attending the graduation ceremony. Each ticketholder, including children, will be entitled to one seat.

In recognition of their excellence and the stories they have told about their journeys in higher education, five graduating students will be speaking at the commencement ceremony – two in the afternoon and three in the evening.

Tiera Boyter started at Piedmont Technical College in 2008 with the emergency technician certificate. She works with the Greenwood County EMS and as a nurse technician in the emergency department at Self Regional Healthcare, but she decided she wanted to finish her education for her true career goal. The Hodges resident will be receiving her Associate in Applied Science Degree with a major in Nursing. She plans to continue working in critical care. Tiera and her husband, Rodney, have two children, Dalton and Will.

Megan Long of Newberry had her future goals planned out while in high school. She was taking pharmacy technology classes with plans to become a pharmacist. Then she received a brochure from Piedmont Tech about the radiologic technology program that changed her life. She will be receiving her Associate in Applied Science Degree with a major in Radiologic Technology. Megan plans to attend Orangeburg-Calhoun Technical College in the fall to earn her specialization in mammography.

Rossana Cubillan came a long way to get to Piedmont Tech. Upon graduation from high school, she left her native Venezuela to pursue an education in America and found her way to Greenwood. She will be receiving her Associate in Science from the Honors Program. She will be attending Lander University in the fall as a chemistry major with the goal of entering medical school.

Pamela Anderson has always had a dream to work with children, but she was afraid to chase that dream. An encounter with Piedmont Tech’s Pleshette Elmore gave her the courage to finally go after that dream. She will be receiving her Associate in Applied Science Degree with a major in Early Care and Education. The Edgefield native will be returning to PTC in the fall to complete her general education courses before transferring to Lander University to pursue her bachelor’s degree in elementary education. Pamela and her husband Leroy have four children, Alex, Randall, Shania and Keyonna and three grandchildren.

Matthew Gault of Clinton attended two different universities trying to find a career that was meant for him. After working with a commercial HVAC technician, he decided to enroll at Piedmont Technical College. He will be receiving his Associate in Applied Science Degree with a major in Heating, Ventilation and Air Conditioning Technology. He plans to pursue a bachelor’s degree at Lander University with the hopes of someday owning his own business.

A special feature of the commencement exercises will be recognition of top graduates from Abbeville, Edgefield, Greenwood, Laurens, McCormick, Newberry and Saluda counties.