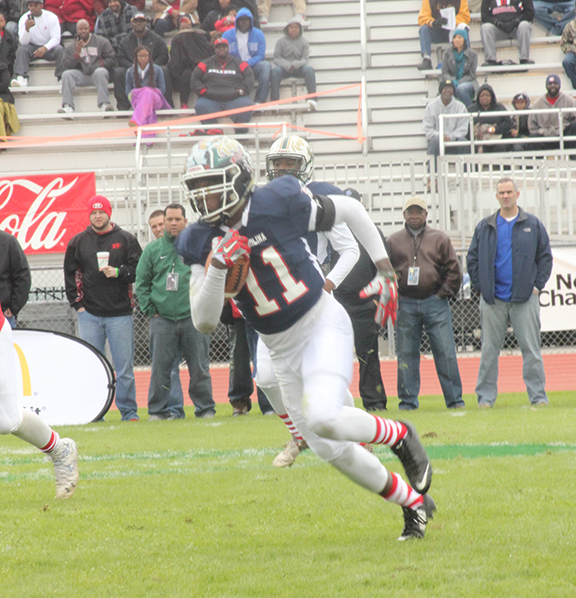 It was a chilly, wet and muddy last Saturday as the Paddle Battle got underway at Laney High School Stadium. As is normal for All Star Football defense dominated the early going as the teams battled to 0 to 0 in the first quarter and went to intermission tied at 14 all. Georgia had scored first and at the 2:43 mark in the second quarter quarterback Liam Welch had managed to connect for two touchdown passes. Near halftime the South Carolina quarterback took advantage of a Georgia muffed punt and sprinted 17 yards into the end zone to announce South Carolina planned to remain in contention. Enter Fox Creek’s Dalton Swires who grabbed a loose ball following the ensuing kickoff giving Smith another opportunity. Another Edgefield County player, Chad Gilchrist, was on the receiving end of a touchdown pass and the two teams went to the locker room tied 14 to 14. The second half got off to a less than favorable start for the SC team with a fumble and on the next play from scrimmage GA took the lead 21-14. Bowen Smith brought South Carolina back quick tossing a pass to WE’s Chisolm to knot it up again at 21 all. A tie game going into the final quarter would hold up until the game clock wound to only four minutes left. GA’s Mance suddenly made things get real dicey with a 49 yard TD run. About one minute later Georgia took a 36 to 21 lead as Welch threw another one. That is the way it ended. Georgia has the Paddle.