By Kate on January 7, 2016Comments Off on Clemson Tigers to Play for National Championship 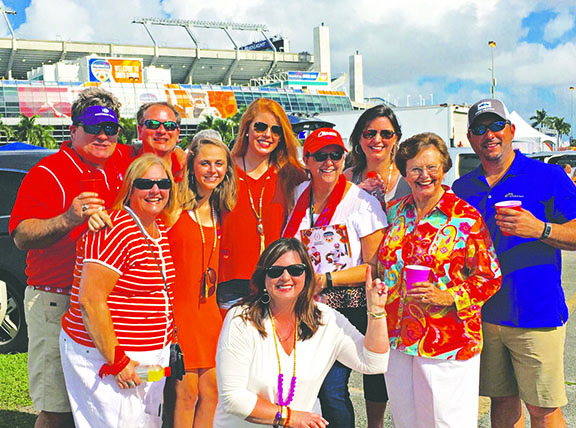 The 14-0 Clemson Tigers, in front of a large percentage of the population of South Carolina, defeated Oklahoma 37 to 17 in The Capital One Orange Bowl last New Year’s Eve. Clemson’s offense led by quarterback Deshaun Watson and running back Wayne Gallman rolled by 533 yards on Oklahoma’s defense. Watson, the game’s Most Outstanding Player, had 145 yards in 24 carries rushing with a 5-yard touchdown and completed 16 of 30 passes for 187 yards with a 35-yard touchdown pass to Hunter Renfrow. Watson’s rushing yards and attempts were Orange Bowl records for a quarterback. Gallman rushed for 150 yards in 26 carries with touchdowns of 1 and 4 yards. He had 111 yards on 19 carries in the second half. The Tigers finished 530 yards on offense and outgained the Sooners 225 to 121 yards in the second half. Greg Huegel kicked field goal of 26, 36 and 43 yards to complete Clemson’s scoring and set a school record for field goal in a season at 25. The win means the Tigers will be playing for their first National Championship since they won it in 1981 with a 22-15 victory over Nebraska. Coach Dabo Swinney, a native of Alabama, will take his 14-0 Tigers to Glendale, Arizona for the National Championship Game against The University of Alabama.

After a pregame buildup of anticipation to match a small Super Bowl, the second-ranked Crimson Tide obliterated the No. 3 Michigan State Spartans to claim the final spot in the National Championship Game against top-ranked Clemson. A brilliant second half from Alabama, spear-headed by quarterback Jake Coker, helped the Tide complete the rout, as the 2015 Cotton Bowl closed out the year in resounding fashion. The University of Alabama, that has won 15 National Championships, last won college footballs championship in 2012 defeating Notre Dame 42 to 14. Clemson and Alabama have met fifteen times since 1900 with The Tide winning 12 of the contests. The most recent game between the two was August 30, 2008 when Alabama won by a score of 34 to 10. Clemson’s last victory over Alabama was October 25, 1905. The Tigers posted a 3-2-1 record with wins over Georgia, Alabama and Alabama Polytechnic. One hundred and sixteen years ago, on November 29, 1900, Clemson won the first game ever played between these two legendary football programs by a score of 35 to 0. The game was played at North Birmingham Park in Birmingham Alabama. With approximately 4:00 left in the game, captains from both Alabama and Clemson agreed to end the game early due to an unruly crowd and impending darkness. This one will not end early, even though it is likely to be far more rowdy since The University of Phoenix Stadium will have 72,200 plus.

Clemson Tigers to Play for National Championship added by Kate on January 7, 2016
View all posts by Kate →