“Spike” is Back! Ready for the New Year

By Kate on January 7, 2016Comments Off on “Spike” is Back! Ready for the New Year 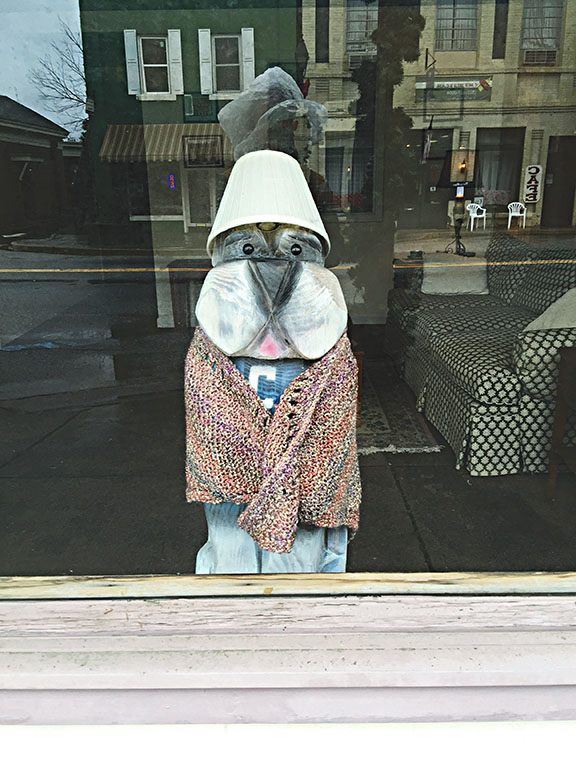 A Tale Told by a Local Raconteur According to John Kemp (Sr.), his son Charles owned a woodcarving of a Citadel Bulldog which sat in his front window on Main Street. The bulldog’s name was “Spike” and it was abducted a year ago, in 2014, and various suspects were questioned. No one owned up to having absconded with Spike. One bit of information came from Lynn Hadden of Magnolia’s (which is next door) who saw the bulldog in the window and a man was looking at it. Lynn went to the back of the store and returned and “Spike” was nowhere to be seen. Charles received an anonymous note asking him to sing, with his daughter Dorothy Kate, under the Town Christmas Tree (in 2014). They were to sing at the top of their voices the Christmas song “Jingle Bells,” which they did. And an audience was there to witness. “Spike’s” family received a card saying any attempts to rescue the bulldog would mean it would get chopped up. About six months into the scenario, Charles received a photo of his “Spike” in a bar in Savannah, in the company of females. No word was heard until Wednesday morning, December 30, 2015. In the early morning, around 6:30, Spike’s grandfather, Mr. Kemp, was passing by Charles’ place of business and happened to see a figure in the window. He went around the block, parked and came up to the window to find Spike wrapped in an old woman’s shawl with an ill-fitting lamp shade for his chapeau. Spike is back. Or is He? Actually, NO. This is not Spike, but possibly Spike’s grandfather, according to the raconteur. On New Year’s Eve he had shed his shawl and his shade hat, and was seen as not the real Spike. Was there a gobbler heard in the distance?