By Kate on January 12, 2016Comments Off on The First Ever Recorded Freshwater Coast Big Bass Fishing Tournament 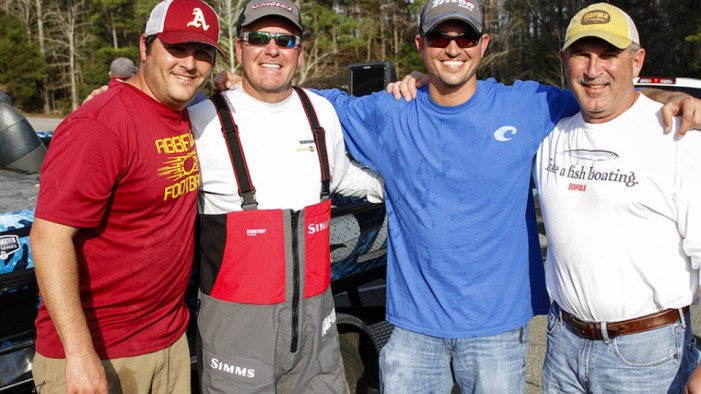 Early in December 2015 the gauntlet was dropped during formal ceremonies at a North South All Star Game practice session in Myrtle Beach, South Carolina. Lee Sawyer and Wayne Botts, talked their way into meeting Davey Hite and Casey Ashley on Lake Russell to establish bass fishing supremacy, on the freshwater coast, once and for all. In case you have been in Antarctica or Ohio for the last thirty years and therefore do not know the aforementioned fishermen let me introduce you. Sawyer retired from coaching in 2014 after 30 years on the sidelines. He notched a 107-24 record in 10 seasons while head coach at Strom Thurmond High School and set numerous records during his tenure there. Lee tallied five state championships, one as a head coach and four as an assistant during his career. Botts is a current assistant coach at Abbeville High School and just tallied a state championship in 2015. With the 2015 title, Botts has four as an assistant coach so far. Davy Hite and Casey Ashley are both Bassmaster Elite pros with Classic championships in their resumes. Sawyer and Hite have a long-standing friendship while Botts and Ashley have known each other for basically their whole lives. At the end of this historic day Lee Sawyer and Wayne Botts had defeated Davy Hite and Casey Ashley 9.84 pounds to 8.4 pounds in a two boat team tournament on Lake Russell. Lee and Wayne can now frequent every bait and tackle emporium from Modoc to Newry and regale the regulars with tales of their domination of the professionals. Davey and Casey will head off into another year on the Bassmaster Elite Series Circuit anxiously looking forward to next December when they can focus solely on taking back The Freshwater Coast Big Bass Fishing Title.

The First Ever Recorded Freshwater Coast Big Bass Fishing Tournament added by Kate on January 12, 2016
View all posts by Kate →