By Kate on January 28, 2016Comments Off on Town of Johnston Hires Female Police Officer First in Nearly 30 Years 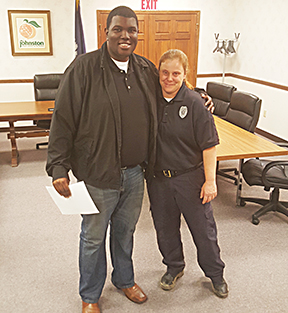 Johnston Police Department has hired their first female officer in nearly 30 years. Jacquelyn (Beth ) Roberson of Batesburg officially joined the department’s ranks Thursday, Jan. 21. Speaking to The Advertiser shortly after the hiring, Police Chief Lamaz Robinson said the move shows “women can be hired in law enforcement even in a small town.” “It’s a great day for women in different positions,” he said. Robinson went on to say, “We’re just glad to have another asset to our department,” and noted that out of all the candidates interviewed, Roberson was the “best qualified.” Roberson has had previous work in law enforcement having worked for nearly two years at the Saluda County Detention Center. Of her hiring, Roberson told The Advertiser, “I’m thankful for the opportunity. I look forward to it.” She went on to specifically say that she appreciated Chief Robinson, Mayor Terrance Culbreath, and Johnston Town Council for the opportunity to work as a police officer for the town. As stated, Roberson is not the first female to have been hired by the JPD. That distinction, according to The Advertiser’s sources, belongs to Stella Padgett who was a police officer for the town in the early 1980s. And while Roberson may be the first in nearly 30 years, she may not be the last to join in the near future. Johnston Town Council recently approved adding another officer position to the force, and as Chief Robinson reminded, “We’re an equal opportunity employer.”