By Kate on February 1, 2016Comments Off on Reactions to Kinder Morgan Donation 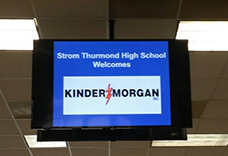 Kinder Morgan, the company which has proposed running a new pipeline through Edgefield County as part of their expansion project across the Southeastern United States and would use the power of eminent domain to do so, donated $50,000 to Strom Thurmond High School, Wednesday, Jan. 27. The donation, however, has not come without controversy. Senator Shane Massey, who has been a staunch opponent of the project and its use of eminent domain to acquire the land needed for it, told The Advertiser in an interview shortly after the donation, “I don’t know how you turn down $50,000,” but went on to say that the move shows the company is “clearly trying to buy goodwill.” Massey said that this donation is not like donations made from local businesses who have ties to the community and that have an interest in the school system. “This is just about making sure they [Kinder Morgan] can get people’s property,” he said. Massey said that he does not have a problem with the school accepting the $50,000 but said, “I still don’t think a private, for profit, unregulated company should have eminent domain power.”

Representative Bill Hixon, who also spoke with The Advertiser regarding the donation, called the money “very nice” and said, “I’m sure they [STHS] can use it,” echoed Massey saying, “It looks like they’re [Kinder Morgan] trying to buy friends.” Hixon said that he is not against Kinder Morgan but added, “I’m trying to make sure people’s private property rights are protected.” Hixon went on to say, “I don’t think a company that’s not a public utility should be able to use eminent domain to acquire property.” To that end, Hixon mentioned the companion bills currently in the House and the Senate that have been proposed to deal with this issue. Hixon said the bill is also on the Republican Caucus Agenda which means it is an issue that they mean to see accomplished this year.

The Advertiser tried but was unable to reach the Edgefield County School Board Chairman for comment in time for publication. However, a student who was at the presentation spoke with The Advertiser and said that all the students were “forced” to attend the “pep rally event.” That student went on to say that “a guy with a camera” filmed the ceremony and added, “It all felt really fake and staged.”

The Advertiser also contacted Kinder Morgan for their comments on the donation, specifically asking if they would like to address the negative reactions that have surfaced as a result of it or if they intended to donate money to any other schools in Edgefield County. A spokesperson with the company responded by email. The entire response was, “Kinder Morgan regularly works within the community on multiple donations and sponsorship opportunities with local entities in the areas where we operate. As partnerships develop, they will be announced, if appropriate.”

Interestingly, STHS is not the only local organization to receive funds from the company. It has been reported that Kinder Morgan also made donations to the North Augusta Robotics team and the performing group JAMP. However, should the school refuse the money, they would not be the first local entity to do so. Neighboring Richmond County in Georgia declined a donation of $25,000 from the company last August which was to have provided for emergency call boxes along the Riverwalk.

The Advertiser will continue to follow the Kinder Morgan expansion efforts and any other news related to the company as it affects the county. To see our previous coverage of Kinder Morgan, please visit our website at www.edgefieldadvertiser.com

Reactions to Kinder Morgan Donation added by Kate on February 1, 2016
View all posts by Kate →