By admin on April 6, 2016Comments Off on Palmetto Pipeline Project Suspended 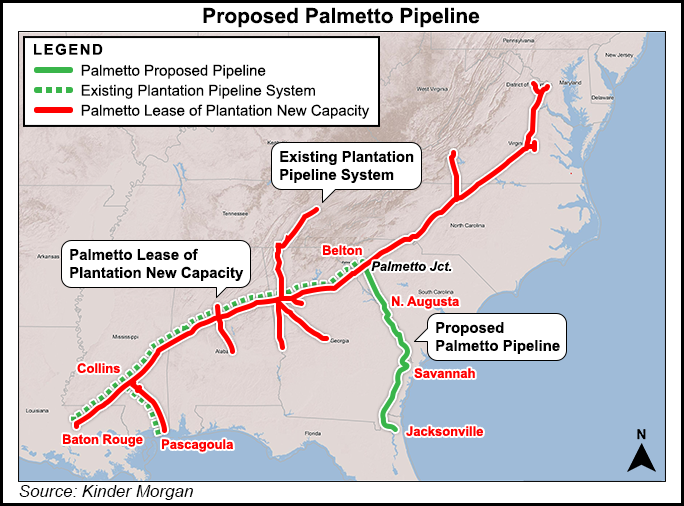 Kinder Morgan has announced that they have suspended their planned project; the construction of which they had reported earlier last year.  The news of the suspension came after a Georgia appeals court denied the company a certificate of need which would have allowed the company to use eminent domain to acquire private property for the project.  That appeal was made after the Georgia Department of Transportation blocked the project’s efforts in that state earlier last year.

“While we are disappointed with the court’s decision, we realize this outcome was a possibility given deference which the court was required to give to the decision of the Georgia DOT, and we are currently reviewing the decision, its ramifications, and our options,” Kinder Morgan said in a statement shortly after the court’s decision in early March.  Theoretically, the company could have continued with the appellate process, however, its success there was said to have been unlikely.

Then last week (the week of March 28), Kinder Morgan issued a statement on its website saying, “Kinder Morgan has suspended further work on the Palmetto Pipeline project, following the unfavorable action by the Georgia legislature regarding eminent domain authority and permitting restrictions for petroleum pipelines.  While this legislative action was disappointing, we remain committed to providing customized transportation solutions to our customers.”

The Advertiser contacted Kinder Morgan for further details on this statement.  However, Melissa Ruiz, a spokesperson with the company, said that she “can’t elaborate on the statement” but did state, “This suspension is for the entire project (not just Georgia).”  However, it is important to note that suspended, which Webster’s New World Dictionary defines as “to stop temporarily”, is not a definite word, and as such, the Palmetto Pipeline project could be resurrected in the future.

Part of the Palmetto Pipeline was slated to run through Edgefield County.  However, many land owners opposed the project and appealed to state legislators for protection against Kinder Morgan’s use of eminent domain.  At the onset of this pipeline project, South Carolina’s eminent domain laws were questionable as to whether they prohibited private, for profit companies such as Kinder Morgan from using the land acquiring tool.  In response, protective legislation, much like that used by Georgia to protect its private property owners, was proposed and is currently making its way through the SC legislature.  That legislation more clearly establishes use of eminent domain and would restrict its use by private, for profit companies.  The legislation has already been passed by the Senate and is currently with the House.

The Advertiser has covered the  proposed pipeline since Kinder Morgan first sent out letters to land owners within the county announcing their intentions and asking for permission to survey lands.  To see our past coverage on the Palmetto Pipeline, please visit our website at www.edgefieldadvertiser.com.