By admin on June 22, 2016Comments Off on Area Group Attended Ali Memorial Services 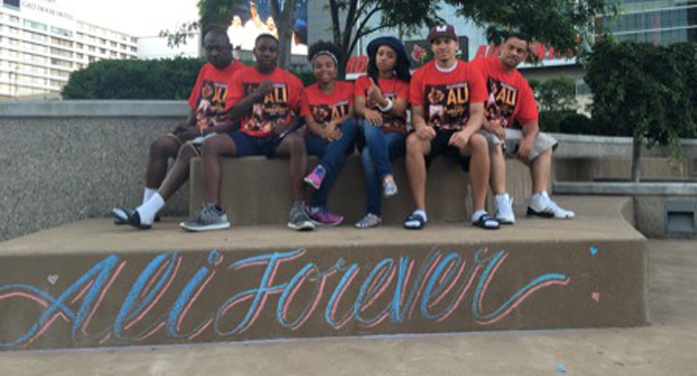 The Augusta Boxing Academy team traveled from Augusta, Georgia, to Louisville, Ky., last week for the memorial events honoring Muhammad Ali.  Among them were 3 coaches and team members Orlando Hernton Jr., Desmond Lyons, Savannah Talbert, and Saliyah Talbert.  Orlando will be attending Morehouse College in the fall and Desmond is a student at Aiken High School.  Savannah and Saliyah Talbert are students at Strom Thurmond High School and W.E. Parker Elementary School respectively.  While in Louisville the team toured the Ali Center which focused on all aspects of Ali’s life to include his involvement with civil rights, his humanitarian efforts, and his accomplishments as a prized boxer.  The athletes also toured Ali’s childhood home where they met professional boxer Bernard Hopkins.  They visited the gym where Ali trained as a youth and witnessed a bike ride in his honor.

The team also met former trainer of Laila Ali (Dick Green) while touring the city.  They had an opportunity to watch Ali’s  funeral processional.  The finale of the trip was attending the memorial service honoring the life of Ali at the KFC Yum Center.  Reporters from Amsterdam, Africa, Spain, India, ESPN and Louisville, Kentucky, interviewed the team about the impact Ali had on their lives.  They were eager to report that Ali inspires them to be great athletes, but more importantly to work hard to be exceptional people who possess spirituality, courage, discipline, respect, and self-determination.

The Augusta Boxing Academy is on a mission to develop exceptional and honorable youth.  We do many community service projects during the year and going to Ali’s memorial helps reinforce the idea that we should strive to help others.  Our upcoming volunteer projects include sponsoring and serving beverages at the upcoming prom for adults with special needs in Edgefield.  We will also host a 2nd annual Food 2 Fight hunger canned food drive and Fitness Challenge for the Salvation Army in August, and volunteer to assist with the national Ironman event in Augusta in September.  As Ali said … Be Great. Do Great Things.