By admin on June 23, 2016Comments Off on BREAKING – Assault & Robbery in Town of Edgefield 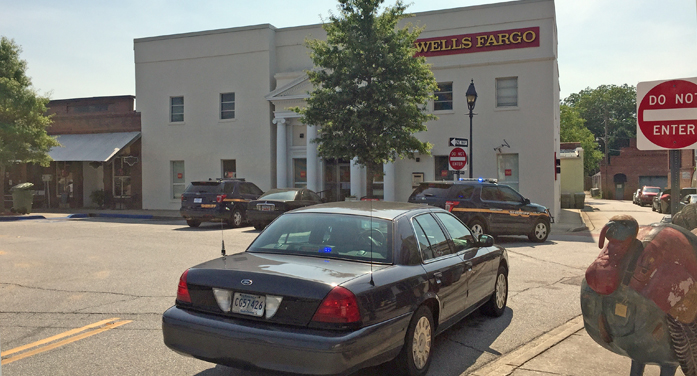 Three juveniles have been captured after a robbery that occurred around 10:00 Thursday morning, June 23, in the town of Edgefield.  According to an employee of Wells Fargo Bank, the crime happened on the sidewalk outside of their establishment as a woman was coming to the bank to make a deposit.  According to Police Chief Ronnie Carter, who spoke to The Advertiser regarding the crime, the woman was approached by three juveniles who stole from her the bank bag she was carrying.  The woman was reported to be “shaken up” but unharmed in the incident.  Additionally, while Chief Carter did not wish to release, at this time, the amount of money in the bag, he did confirm that it was not $5,000 as was being widely reported.

Law enforcement, including the Edgefield Police Department, deputies with the Edgefield County Sheriff’s Office, and the Bloodhound Tracking Unit of the ECSO responded to the scene.  Shortly after noon, Thursday, Chief Carter confirmed for The Advertiser that all three suspects, as well as the money, the bank bag, and receipts stolen in this crime were recovered.  “We think we have everything,” Chief Carter stated.  Chief Carter said that he wished to thank the public for their assistance in the capture of these suspects.  He said that is was witnesses’ accounts and tips that helped in the speedy apprehension of the criminals.  He also credited the bloodhounds with the recovery of the items saying, “ They led us straight to it.”  While not releasing the actual sites where the suspects were captured at this time, Chief Carter said that the suspects were found in “various places” inside the town’s limits.

Chief Carter was also able to confirm other reports to The Advertiser that the three suspects in this robbery had been harassing other businesses on the square all morning.  One witness to this harassment called the suspects “very arrogant” and “rude” and stated that they had “no respect for anything.”  When asked if he believed this crime was premeditated, Chief Carter said that he did not believe this particular victim was targeted but that he did believe the three intended to commit this type of crime.  He said that he believed the suspects were looking for someone to come along with a money bag and that this woman happened by at the wrong time.

No identities for the three suspects have yet been released.  However, Chief Carter was able to confirm that one is 17 years old, another either 17 or 18, and another is 14 years old.  Additionally, Chief Carter confirmed that at least one of the suspects is known by law enforcement and has a record.  All three are being charged with strong armed robbery.

BREAKING – Assault & Robbery in Town of Edgefield added by admin on June 23, 2016
View all posts by admin →