Jean Bell Gets Her Wings

By admin on June 6, 2016Comments Off on Jean Bell Gets Her Wings 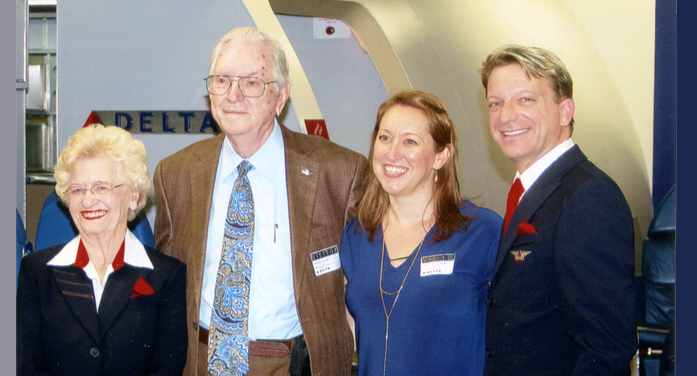 Eighty-six year old Jean Bell of Ward, SC, finally got her wings.  Not her angel wings — although some may argue that she deserves those too — but her flight attendant wings.  The story of this event was told to The Advertiser by family friend Kelli Graham, a former flight attendant herself, who was instrumental in making this life-long dream come true. Kelli lives with her husband and five children in Edgefield, and the two families, Bells and Grahams, attend the same church in Johnston – the way the two met originally.

According to Mrs. Graham, Jean Bell had dreamed of becoming a flight attendant when she was young.  Her plans were to forego a family and, instead, spend her time traveling the world over as a flight attendant.  However, when Mrs. Bell applied to become an attendant at age 18, she was turned down for being too short.  Standing only 4’11”, Jean Bell could not reach the overhead luggage racks.  However, once Kelli Graham learned of this dream many years later, height (and age) no longer posed a problem.

Mrs. Graham, who still retains contacts within the airline industry, reached out to those she knew and told them Mrs. Bell’s story.  Things just kind of took off (no pun intended) from there.  Kelli, along with her own daughter, another family friend and Mrs. Bell’s husband and two of their sons, accompanied Jean Bell to the Delta Airlines Training Center in Atlanta, Ga.  Kelli Graham shared that she had expected the company to show Jean around the facility and perhaps give her a few photo ops.  However, as Mrs. Graham put it, Delta really “put her [Jean Bell] through her paces.”

When the group arrived at the training center, they found that Delta had a flight attendant’s uniform waiting for Jean.  How, one might ask, would Delta have a suit to fit this little lady?  It seems that Mrs. Bell’s sons went through her closets measuring her clothes.  They then provided measurements with which Delta was able to have a custom uniform made for her; a uniform that now hangs proudly in Mrs. Bell’s closet.  Dressed the part, She then began her training which was described by Kelli Graham as a crash course of the typical 7 weeks training course.  The crash course included learning more than just how to seat and serve patrons.  Jean was also shown the less glamorous side of the job which includes such things as learning how to put out a fire, how to inflate a life vest, and how to evacuate a plane; all of which she did.  In a simulated emergency, Jean evacuated her husband from the aircraft and even went down the emergency evacuation slide herself.  Delta taught this little lady who was once considered too short to work as a stewardess how to attack a terrorist!  At the end of this crash course in flight attendant training, Jean was given a certificate and pinned with her wings.  A dream that had been a lifetime in the making.

After initially speaking with Kelli Graham for this story, The Advertiser did speak with Mrs. Bell herself.  Of finally getting her wings, she said, “Sixty something years was a long time [to wait],” but added that it was “not too long for a dream to come true.”  She called her experience “great fun” and said, “Kelli cried; I cried.”  Mrs. Bell went on to say, “A friend like Kelli who will go the extra mile to make a dream come true … is a real blessing.”

Jean Bell shared that while her dream did not come true at age 18, she has since come to see that “[God] just ordered every step of the way.”  Jean explained that after her initial disappointment with not being hired as a stewardess, she made up her mind to travel anyway, first with a close female friend and later, after marriage, with her husband.  Her first trip was to New York, and her first trip out of the country was to Cuba.  Since her travels began, Jean Bell has traveled to over 22 countries and has traveled over 2.5 million miles, due in large part to her husband’s job as well as family trips, especially those taken after his retirement.  “I did so much more than I would have ever done as a stewardess,” Jean said.  Acknowledging God’s plan for her life was far better than her own, she said, “God has ordered our lives for His purpose and not our own … and He has truly blessed us.”

Jean has been married to husband Harry Bell for 62 years.  They are the proud parents of three sons and one daughter (deceased) and have numerous grandchildren. Having gotten a taste of the life of a flight attendant, Jean Bell can now be found back on the Ridge with her feet firmly planted on the ground.

Jean Bell Gets Her Wings added by admin on June 6, 2016
View all posts by admin →