Tony Frazier – from under the hood to behind the desk

By admin on July 7, 2016Comments Off on Tony Frazier – from under the hood to behind the desk 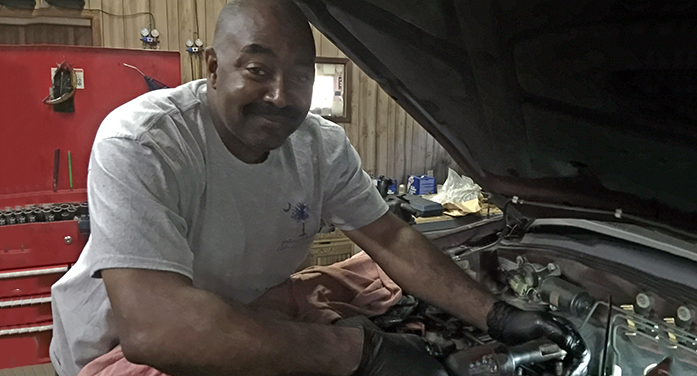 Tony Frazier is quick to give the many mentors in his life credit for what he knows and has accomplished.  It is what now he wants to do with his life – give back to the young people out there what he gained during his schooling.  He is leaving his business of 27 years, Frazier Automotive, to teach at Strom Thurmond High School, fulltime.

It was an early Tuesday morning interview between the Advertiser and Frazier at his business place which he continues to occupy as he “finishes up” with some automobiles and trucks. His energy for his work is always available to him and can be felt in his personality.  There was something else that was revealed on Tuesday morning — his passion for the work to come, his almost reverence for those who helped him to become a man, and his gratefulness to those who taught him his skills.  And don’t forget family.  They came last in his tributes in the interview, but their importance was no less than those in the community!

Tony says he started working at age 14 – at Fairway Grocery in Johnston.  Mr. Russell Clark and Mr. Langley were important to his learning in this environment. “Mr. Clark even taught me how to tie a necktie.”  This was when he was going to the prom.

Frazier worked throughout high school and his college days (Aiken Tech), as he learned all the while about life.

“My first great teacher was Mr. Levi Andrews who taught me auto-mechanics at STHS.” Tony went on to say that he taught his students how to be men.  There were young people in the class who were single dads, and Mr. Andrews knew how to advise them to move on with their lives.  “How to get there” was in Andrews’s message. “Your presentation in life matters as well as your skills.”  Andrews taught them how to make the right presentation.

His second teacher of real importance was Mr. Richard McGee at Aiken Tech.  He stirred his students to know how to have “character, accountability and responsibility.” Frazier went from there to a job, for ten years, at Goodyear.  He went from 4 years as technician to six years as service manager.  “They set me up to attend every training course possible – what they do they do well.”  After Goodyear he felt he was ready to launch his own business.

Frazier Automotive began at the old Otasco location behind the south side of Edgefield town buildings.  He was there for two years before buying his present location where he has remained for twenty-seven.

He turns to family and what they have meant.  He started his self-employment in 1989, and in ‘94 his father, Johnny Frazier, came in to the business with him.  His father had just retired from Kimberly Clark, and he remained with Frazier until 2004, two years before he died. “My dad was a quiet person, and he could do anything.  He only had to see something once to understand it and to know how to do it.” Tony stated that his father was a reader; “he read everything.”  Tony sees himself as a little different.  Though he reads he also puts energy into communicating with his public, which has profited him greatly.  He says he did inherit his father’s trait of seeing something once, understanding it, and being able to repeat it.

Tony is especially grateful to his sister Annette Frazier who was office manager for 20 years.  A very attractive lady, she was there to greet the customers and to keep things moving while Tony and his help were “behind the scenes.”  Of her Tony said: “She was fantastic in her work, and so trustworthy.”

He did not leave his mother out of his support group, Dora Frazier of Trenton. “She was my inspiration.  She always said, ‘You can do anything you want to do.’”

And then there is the wife. “I married my high school sweetheart (and later admits they knew each other in middle school).” Mary Clark Frazier of Johnston has been Frazier’s constant support.  She has given him the backing for leaving his business to teach in the schools.  (Mrs. Frazier works at the Kimberly Clark Warehouse which has recently been bought by Fed Ex.) Both have obviously thrived in their working environment with a great interchange of support.  They have been married a little over 32 years.

The Fraziers have two children.  A son, Quentin, lives in Charleston and works for Boeing; a daughter Lashanda Philips who lives in Texas.  There is one grandchild.

Tony Frazier spent much of the time in the interview looking out the window, a bit symbolically as he looked toward his future plans. He talked about how fortunate for those he is teaching: when they graduate they will have more than he had.  They will have the skills from going to dealerships twice a week in their schooling (giving them experience) and they will have the opportunity to pass the ASE exam which will give them certification for their work.

Frazier looks forward, with excitement in his voice, to sharing what he has learned about his business and about life with his future students. When asked by the interviewer, in learning that he will be keeping his shop open for his own interests, if any students might make their way to his shop as workers, he said, “Yes, that is possible, for they will have all they need to step into jobs such as this business held.”

So Frazier Automotive may not go away completely.  Time will tell.

“Many have asked me why I want to teach students this age, who can be difficult and disrespectful, as experienced by some adults. This is something I have always wanted to do.  What you do is give them rules and if they don’t follow them, there will be consequences.”  Tony is smiling when he says this, remembering his own teenage years and the wonderful mentors who helped him in growing up and have inspired him to share what he has to offer to the next generations.

Tony Frazier – from under the hood to behind the desk added by admin on July 7, 2016
View all posts by admin →