By admin on October 31, 2016Comments Off on STATE CHAMPIONS ! – Wardlaw Varsity Volleyball 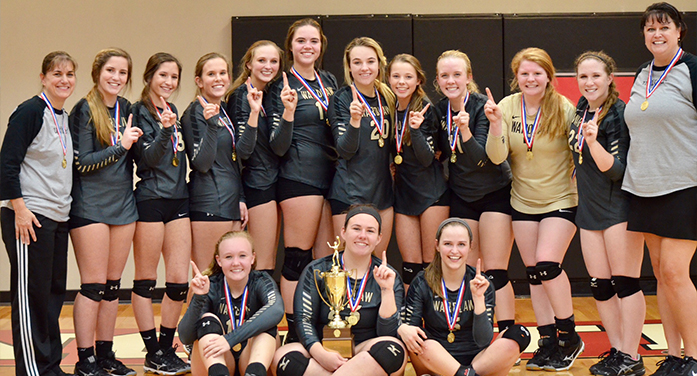 What an amazing weekend of volleyball!  Friday 10/21 Wardlaw Varsity volleyball competed in the SCISA State Tournament as the top-seeded team in 1A.  The Patriots battled through all the teams in their bracket, including North Myrtle Beach, Patrick Henry, Beaufort, Richard Winn, and Holly Hill to win the right to face Mead Hall in the State Championship match Monday night at Northside Christian, 6:30 PM.  In the tournament finals, Wardlaw lost a tough match 1-2 against Holly Hill, but in the ultimate match (played due to double elimination) Wardlaw prevailed over Holly Hill 2-1 to take home the tournament honors.  The Patriots racked up some impressive stats for the State Tournament along the way, with every player participating.  Freshmen Taylor Rodgers (1 dig), Anna Grace Spurlock, and Becca Whitlock (100% serve) gained valuable post season experience as freshmen.  Abby Johnson (100% serve), Abbie Spurlock (100 % serve), Elizabeth Ruth (6 ace, 12 dig, 2.4/3.0 serve receive), Savannah Rodgers (2 ace, 19 dig, 2.3/3.0 serve receive), Anna Rodgers (4 kill, 2 ace, 29 dig, perfect 3.0 serve receive, 98% serve) and Kylie Wash (11 kill, 10 ace, 36 dig, 2.2/3.0 serve receive, 97% serve) ruled the baseline with consistent serving and passing and a relentless defense that refused to quit.  Beth Warnken (12 kill, 8 ace, 16 dig, 5 block, 96% serve, 128 assists) drove the Wardlaw offense to victory with a combination of jump serves, blocks, amazing saves, and quick, accurate sets that kept opponents off balance.  Lexi Quarles (83 kills, 7 digs, 12 blocks, 2.4/3.0 serve receive, 1 assist), Davis Wash (25 kills, 20 digs, 5 blocks), and Catherine Quarles (15 kills, 4 ace, 17 digs, 1 block, 3 assist) put up an impressive show of strength for Wardlaw, dominating opponents and fiercely defending their territory at the net.  “I can’t say enough about the determination these girls displayed,” said Coach Christie Warnken.  Coach Kathy James agreed, saying, “When everything was on the line, they battled it out to the last point.  It was a great experience for us heading in to the 1A State Championship match.”

Monday 10/24 Wardlaw wrapped up a terrific season with a SCISA 1A State Championship, defeating Region opponent Mead Hall (27-25, 25-20, 15-25, 25-17).  The Patriots came out strong in sets one and two, establishing a strong block and powerful serves and attacks with a stingy defense that the Panthers couldn’t overcome.  In set three, Wardlaw got off  to a slow start with a string of errors that gave Mead Hall a breath of hope and the only set they would win all night, but set four was all Wardlaw.  Senior leaders Beth Warnken  who recorded a double-double for the match (2 kill, 4 ace, 16 dig, 3 block, 39 assist), Kylie Wash (4 kill, 1 ace, 24 dig, 2.25/3.0 serve receive, 100% serve) and Abby Johnson walked out hand in hand to receive their second career State championship trophy from SCISA Athletic Director Mike Fanning after the win.  Junior Savannah Rodgers (1 ace, 9 dig, 100% serve) was a rock on defense.  Sophomore standouts Lexi Quarles (21 kill, 4 dig, 2 block), Davis Wash (14 kill, 3 dig, 2 block), Annalee Rodgers (1 ace, 9 dig, 1 block, 100% serve), Elizabeth Ruth (1 ace, 7 dig, 100% serve), and Catherine Quarles (3 kill, 1 ace, 6 dig, 1 block) were all thrilled to receive their first State championship medals.  “This team is so coachable,” said Coach Kathy James.  They are never satisfied with where they are, and they push each other to continually strive for excellence.”  Coach Warnken shared, “At the beginning of our regular season, we counted up the total number of days we had to play together and put a marble for each day of season in a mason jar.  Each day , we removed a marble, and reminded the girls not to take any of our ‘marble moments’ that we have as a team for granted.  When a player had a particular break through, she earned a marble moment to keep from our mason jar.  Tonight, every player earned a marble moment, because they all shared in the success of this season, and in the growth of this team.”  The Patriots finished the season 10-0 in their Region, 33-2 overall.  Great job, ladies!