By admin on December 28, 2016Comments Off on One Muslim’s Conversion to Christianity 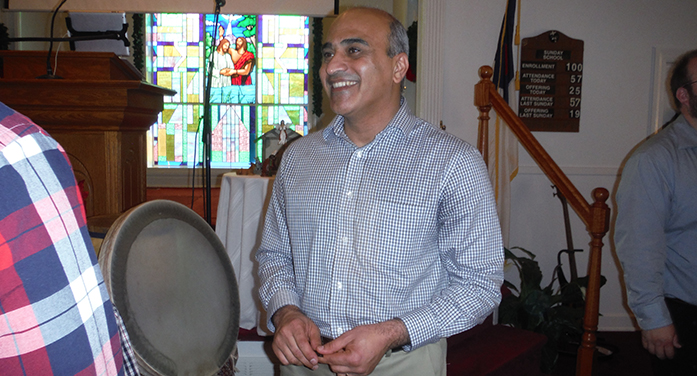 The Rev. Kambiz Saghaey Shares His Testimony at Antioch

“A strong Muslim” – that is how the Rev. Kambiz Saghaey described himself to the congregation of Antioch Baptist Church as he spoke to them Sunday morning during their worship service the week before Christmas.  The Rev. Saghaey explained that he was born into the Islamic faith in Iran and grew up there holding strong to his Muslim beliefs.  However, he left Iran in 1997 to go to Cypress, and that is where his life was radically changed.

The Rev. Saghaey shared with Antioch that when he got to Cypress, he learned of a church there that was converting Muslims to Christianity.  Sagaey said that he “got angry” and decided to start attending that church to argue with its members and to convert them to Islam.  However, after nine months of “arguing”, the reverend said that two things became apparent to him that would lead to changing his life; the special love among the church people and that the Christians could answer all of questions from the Bible.  He explained how the Christians could just open their book and show him the answers.  He was amazed.

It was decided between Saghaey and his wife that they would began reading a Bible they had been given earlier by the church so that they could use it against the Christians in their arguments.  He told Antioch that he had “20 questions” after reading it the first day.  And the church members witnessing to him were faithful to answer those questions.  Saghaey said that he and his wife were struck by Matthew 15:17-20, the verses which explains that it is not what goes into one’s mouth that defiles the person but what comes out of it.  All this time, as a Muslim, he explained that he had been careful about what he put into his body but had not cared about what came out of his mouth, out of his heart.

As the questions continued to mount, Saghaey and his wife decided to read the Koran for the first time in order to compare it to the Bible.  Now, as the reverend explained, he had been in charge of the praying at his church and had spoken the Arabic words of the Koran. However, he had not read the Koran in his native language, and thus, had no true understanding of the words he could speak.  Saghaey shared that it was as he was comparing the two books, he came to the realization, “I didn’t know who I am.”  For three weeks, Saghaey said that he told God that he wanted to see Him, and one day he did.  As he was listening to a sermon at the church, a passage from the third chapter of the book of John was read, and Saghaey shared that at that moment he heard a real voice speak to him and say, in essence, “You wanted to see Me, well, here I am.”

Saghaey said that he immediately gave his heart to Christ and went to tell his wife the news.  Sharing that he had decided to follow Jesus, his wife told him that she was glad because three weeks earlier she had made that decision and had since been praying for his salvation.  Saghaey said that the members of the church were so excited and felt that with his conversion the barrage of questions would cease.  They were wrong.  Saghaey said that now he had even more questions.  Every day, he said, he would knock on the pastor’s door with more questions because he wanted so badly to know God.  Saghaey grew in his faith so much, that when the pastor of that church left, Saghaey was ordained and took his place.

Saghaey and his family took to heart the Great Commission – Go and share the Gospel with everyone.  In 2000, he and his family were forced to leave Cypress and went to Turkey.  There they were connected with a Southern Baptist International Missions Board team.  Together, the shared the Gospel with Iranians in Turkey.  Soon, the Saghaeys began to feel a call to return to Iran to witness for God.  Wanting to go himself, Saghaey’s wife insisted she go first; the reasoning being that if she was arrested, he could actually do something to help he, but if he was arrested, there would be nothing she, as a woman, could do to help him.  So, Mrs. Saghaey went to Iran, but upon her return, the tug was too much on the reverend, and he, too, decided he must go.  After his return, the Saghaeys decide to move their family back to Iran to witness to their countrymen.  Saghaey shard that anywhere they heard of two Christians meeting, they would go and minister to them.  They eventually decided to live among the nomadic people for a while, too, in order to establish relationships with them so that they would be able to share Christ with them as well.

In December of 2009, the Saghaey family found themselves back among their church in Iran preparing to celebrate Christmas, and, unknowingly, about to see face consequences for their faith.   As the Rev. Saghaey was at the podium during his church’s Christmas celebration, the back door opened and in walked the police.  Saghaey was arrested.  For 21 days, his family did not even know where he was being held.  Saghaey shared that the police used different tactics, including offers of money, to try to get him to renounce his faith.  They even tried to use the threat of taking his adopted daughter from him, but Saghaey said that he would not give in.  Finally, after 86 days, Saghaey was allowed bail and released from captivity.  However, his troubles were far from over.

Sagahey now had to face a judge on charges that were brought against him for his Christian beliefs.  Two times over the course of this process, Saghaey was brought before the same judge, and each time, that judge’s resolve to find a reason to hang Saghaey was apparent.  However, he lacked the proper charges to do so, and so, instructed the prosecutor to change the charges so that he could have the reverend hanged.  The prosecutor, though, continued to leave the charges the same.  After their second meeting in court, the exasperated judge told Saghaey that he would find something for which to kill him.

Leaving after the second court appearance, Saghaey was told he would again be back in court in two months to face the same judge again.  However, three days later, he received a call in which he was instructed to return to court the following day.  Not understanding this sudden change, which almost certainly meant the worst, Saghaey and his attorney returned to court.  This time, however, they were ushered to another courtroom before a new judge.  And to make matters more confusing, the prosecutor, the same one Saghaey had faced in all his other court appearances, now asked the judge to simply give Saghaey probation and let him leave.  Astounded, Saghaey’s lawyer questioned if the reverend had paid a bribe, but Saghaey reminded his attorney that he had not even paid him.  How could he pay a bribe?  Saghaey, who legally had the right to appeal his sentence, was told by the judge not to appeal.  Saghaey said that the judge told him to just leave – that he never wanted to see Saghaey again.  Saghaey said that that was fine with him because he never wanted to see the judge again either.

A few days later, Saghaey was contacted by his attorney; he had discovered the reason Saghaey had been released.  The first judge in Sagahey’s case, the one so intent on killing him, had died.  Now, all the other judges were afraid of Saghaey and his God, and they just wanted him out of their court system.

Free to go, Saghaey and his family left Iran and returned to Turkey.  The Saghaey family has since made their way to America where Saghaey is still active in the ministry.  He and his family now live in the South from where he is still able to minister to Iranians across the globe via satellite!

“All of us are missionaries,” Saghaey told the Antioch congregation.  “God wants to use you,” he encouraged them and reminded that “Go and make disciples” is a command from God not a choice.  He also encouraged the worshipers to read and know their Bible because, “It’s the word of God.”

One Muslim’s Conversion to Christianity added by admin on December 28, 2016
View all posts by admin →