By admin on December 6, 2016Comments Off on Strom Thurmond Statue Donated to the High School that Bears His Name 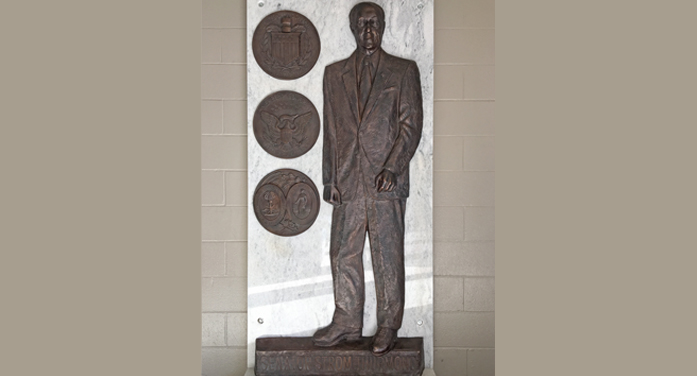 Nearly forty years after its creation, a life-size sculpture of Senator Strom Thurmond is being installed at Strom Thurmond High School. The artwork is referred to as a “bas-relief” which is a sculptural technique that uses chiseling so that the sculpted material is raised above the background plane. It was originally made for the Strom Thurmond Federal Office Building in downtown Columbia. However, for whatever reason, it was never placed in the building.

For the past thirty-seven years, it has collected dust in the basement of the federal courthouse adjacent to the federal office building. Federal judge and Edgefield native Joe Anderson, Jr. discovered the artwork and eventually persuaded the United States General Services Administration to donate the statue to the Edgefield County School District under federal regulations that allow for the donation of surplus property to educational institutions. The statue is a larger-than-life depiction of Senator Thurmond, who began his career as a teacher and later served as County Superintendent of Education, Judge, and Governor. He then served in the United States Senate longer than

any other individual in U.S. history. He eventually served as President Pro Temp of the Senate and was third in line of succession to the Presidency. The display for the statue also includes seals of the State of South Carolina, the United States, and the United States Senate.

The artist who fashioned the statue, A. Wolfe Davidson, emigrated from Russia in 1922. He worked and studied art in New York from 1924 to 1934.

During this time, he was approached by officials of Clemson College about casting a statue of the school’s founder, Thomas Green Clemson. Davidson agreed to produce this statue in return for room, board, and tuition at Clemson College. The statue—now an iconic symbol of the school—was erected in front of Tillman Hall in 1941. Davidson later cast the statue of a tiger that stands outside of Littlejohn Coliseum on the Clemson campus.

Davidson sculpted the Thurmond statue in 1987 when he was 84 years old. It was his last work of art.

James Courtney, Director of Facilities Operations, was in charge of moving and erecting the statue. The statue will be displayed in the lobby of Strom Thurmond High School.

Strom Thurmond Statue Donated to the High School that Bears His Name added by admin on December 6, 2016
View all posts by admin →