By admin on January 26, 2017Comments Off on Local Couple Met “Dopey Challenge” 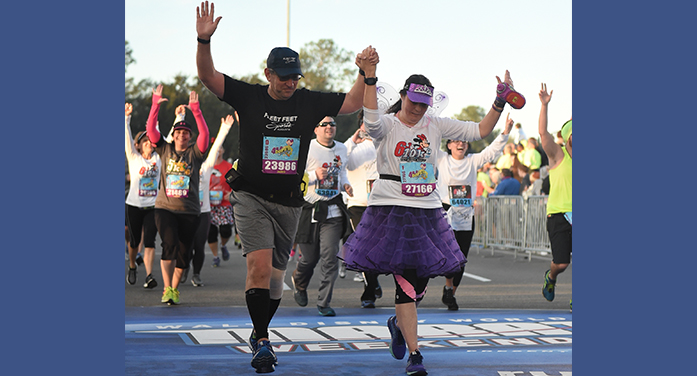 What Disney running event challenges participants to run 48.6 miles over a 4 day period through the 4 parks of Walt Disney World in Orlando, Florida? It’s the aptly named Dopey Challenge, and 2 of Edgefield County’s own accepted the challenge this year. Both runners had done 5K’s and 10K’s in the past, and one had also run 2 half marathons, but neither had EVER run a marathon. The Dopey Challenge requires a 5K, 10K, half marathon, and marathon to be completed in 4 consecutive days!

On Thursday, January 5th Angela and James Wise began this adventure by completing a 5K which was an easy 3.1 miles for them. The next day this ambitious couple ran the 10K (6.2 miles). Saturday’s half marathon of 13.1 miles was canceled due to the threat of lightening, but that didn’t stop the Wises and many of their running companions who had come from across the nation and the world to do this. They ran 13.1 miles with park visitors cheering them on as they handed out bottles of water to the determined runners. Sunday, January 8th was clear, but cold and Angela and James faced the daunting new task of running a 26.219 mile marathon!

Just imagine facing a 6 ½ hour run when you already have throbbing knees, aching muscles, and numerous blisters. Despite all that, this Edgefield County couple met the day with determination together. Early in the afternoon their anxious families back home got the news. Angela and James Wise had successfully completed Disney’s Dopey Challenge and would be bringing home lots of bling to show for their effort.

Both runners grew up in our area and graduated from Strom Thurmond High School. In fact, Angela Wise teaches there now. She is the daughter of  Gerald Glanton and the late Shirley Glanton.  James is the son of June and Lane Wise. Congratulations to this inspiring (and yes, a bit DOPEY) Edgefield County couple!!