By admin on February 22, 2017Comments Off on It May Be the “Battle of Aiken,” But Could not Happen Without Edgefield 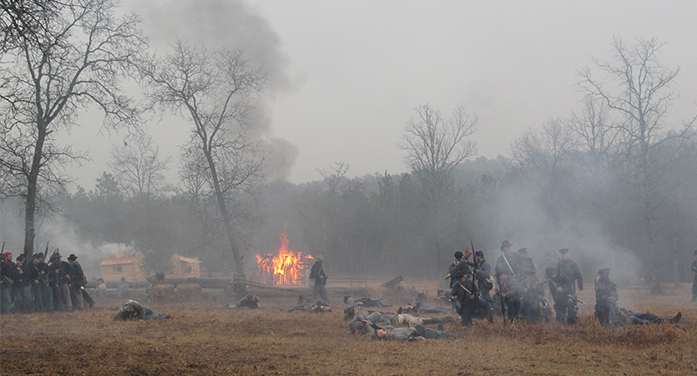 The Battle of Aiken, February 24-26, has grown into an event that includes school children, who are given a day (this Friday) to come and view the skirmishes and hear lectures about the event and the times in which it took place.  Last year they had over 3000 children there, some as far as from North Carolina.

Behind the scenes are a host of people from Edgefield taking major parts in the Confederate activities.  Glenn Zimmerman is the Battle Commander; Justin Guy plays the Adjutant.  Tonya Guy is the President of the Order of the Confederate Rose.

There will be multiple local volunteers there helping with tickets and directions for those attending.

Among the events, parallel to the Battle, will be a Period Wedding.  This will be the actual renewal of vows of a local Re-Enactor couple, Mr. and Mrs. Darryl Cliett.  The wife, Bobbi Cliett, is a master seamstress and has made all the costumes for the event, the gentlemen’s suits, the wedding dress and bridesmaids’ dresses, as well as the flower girls, all in costumes of the period of the Confederacy.  Many know Bobbi as the seamstress who has opened a business in the Tompkins Library basement for making period attire and for teaching sewing.  (The couple will be moving to their home on Brooks Street, Edgefield, in the very near future.) Attendees at the Battle may observe this.

Another event is the Ladies Tea and according to Edgefield Archivist Tonya Guy, folks can buy tickets to it and watch as women in costume serve tea from recipes of old.  Attendees may enjoy the food that is left when the presentation is over.  There is a lecture that goes with this: Kim Poovey will talk on “Cages and Crinolines.” Other things on the 25th are: a Dance Demonstration, a Shoot-out, a Period Funeral, Cloggers, and two battles.  On Sunday, there will be a Church Service, a Fashion Show, and more.  Tickets are available.  Call Tonya at 803-637-4010 or visit www.Battleofaiken.org

The Battle of Aiken is an annual event that commemorates the courageous efforts of a small group of Confederate soldiers led by Major General Joseph Wheeler, who stopped Union Brigadier General Hugh Judson Kilpatrick from burning Aiken and Graniteville.   Kilpatrick, William Tecumseh Sherman’s cavalry commander, was better known as “Kill Cav” for his rashness in battle that got his own men killed. His men would soon leave a scorched swath across South Carolina, burning homes, farms, mills, forests, and even churches.  On February 11, the Union troops marched up Park, Richland and Barnwell Avenues. Major General Joe Wheeler was there to meet him. These men fiercely fought Kilpatrick with everything they had. The two sides entangled in a hand-to-hand battle. Kilpatrick retreated back to his defensive position at Montmorenci and lined up behind barricades previously built. Wheeler fought towards them for the rest of the day. The following day, February 12, Kilpatrick sent out a flag of truce. On February 13, Kilpatrick moved out to rejoin Sherman in the march toward Columbia. Wheeler did the same, sweeping wide in an attempt to get ahead of Sherman so as to help in the defense of the capitol.

It May Be the “Battle of Aiken,” But Could not Happen Without Edgefield added by admin on February 22, 2017
View all posts by admin →