By admin on April 7, 2017Comments Off on E2 Tornado Declared for Part of Johnston 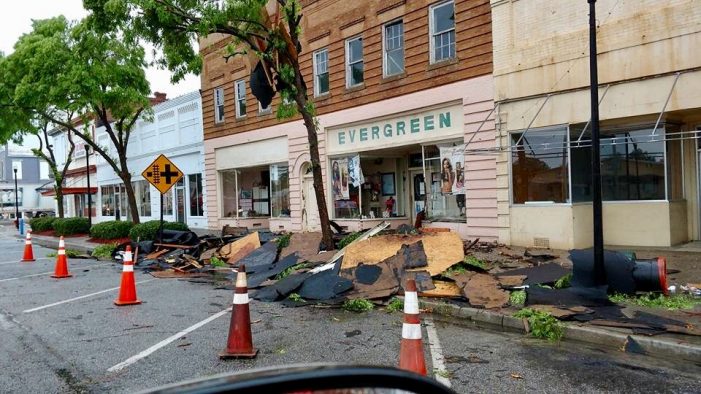 The Advertiser has learned from Emergency Management Director Suzy Spurgeon that the National Weather Service has declared that an E2 tornado was responsible for the damage seen in the town of Johnston, specifically from the northeastern portion of Calhoun Street on towards Ward.  However, straight line winds are being blamed for the damage caused in the other parts of the town.  The Advertiser was actually on the phone with Spurgeon Thursday afternoon, April 6, when the call came in from the NWS.  Saying, “It could have been a lot worse,” especially had the tornado been bigger, Spurgeon said that 33 homes were damaged and one minor injury was reported.  That injury was to a driver of a vehicle and occurred when a small tree or tree limb hit the vehicle causing glass from the vehicle to hit the driver.  The driver was taken to Edgefield County Hospital and treated for minor injuries.  As for how many trees were actually downed as a result of the storms, Spurgeon said they are “too many to count right now.”

As for the rest of the county, Spurgeon said that a couple or reports of damage were received from the Chapels Ferry area of Edgefield.  She replayed that it is believed that this is where the straight line winds began.

As of Thursday afternoon, Spurgeon said that the number of homes without power was fluctuating due to the high winds still being seen in the area.  Those numbers were below 20 but rose again during the Advertiser’s interview to about 25.  Spurgeon said that citizens are urged to be cautious of loose trees, limbs, and lines that may still be blown down from the continued high winds.

E2 Tornado Declared for Part of Johnston added by admin on April 7, 2017
View all posts by admin →