By admin on April 11, 2017Comments Off on Edgefield County receive first place award for prompt reporting of claims 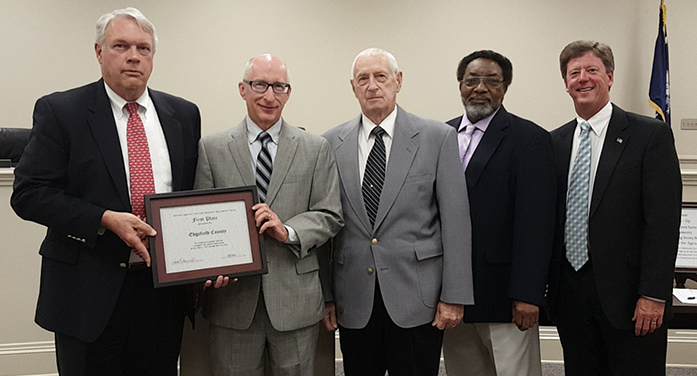 Edgefield County received a first place award from the S.C. Association of Counties for prompt reporting of property and liability claims, a key factor in lowering claims cost.

The award was presented to the Edgefield County Council at its April 4 meeting by John Henderson, Director of Risk Management Services at the Association of Counties.

Henderson told the Council that the support from County Council over the years has been the catalyst that helped produce this very positive result.

He also said that all employees have played a role in achieving this milestone.

Dean Campbell, Edgefield County Council Chairman, said that this is a continuation of the emphasis that has been placed on safety by Council, staff, and others.

“This emphasis results in savings to Edgefield County taxpayers of $127,000 annually for insurance premiums compared to 5 years before,” he said.

Tommy Paradise, Edgefield County Administrator, added that this award is a key indicator that the County is headed in the right direction.

“I am very pleased with the cooperation and dedication of County employees to promptly report liability issues that may adversely affect the County, which ultimately saves the taxpayers money.”