By admin on April 5, 2017Comments Off on JET Opened as Shelter in Wake of Storms 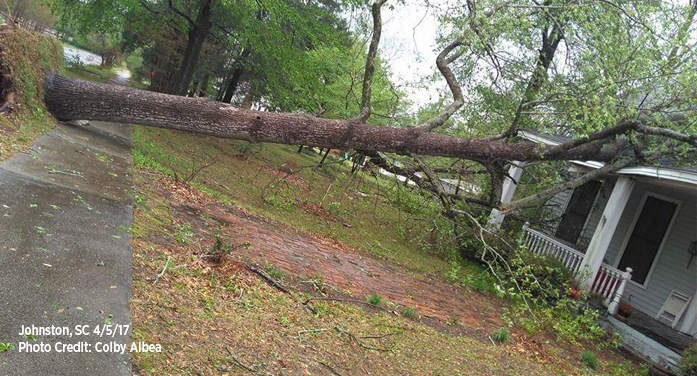 Johnston in Declared State of Emergency

After a long day of storms that rolled through Edgefield County, Johnston Mayor Terrance Culbreath has confirmed to the Advertiser that JET Middle School is being opened as a disaster shelter for those who have experienced damage to their homes or who may just want a place with power to stay for the night.  A shuttle will be making rounds from Johnston Elementary to JET throughout the night for those who may need transportation to the shelter.  JET does have power and running water.  There was no word on how long its usage as a shelter will be needed.  Culbreath said that it is possible the school may open tomorrow night to citizens as well.

Johnston was especially hit hard during the storms with unconfirmed reports (but eyewitness assertions) of a tornado that hit the town shortly after lunch.  Due to amount of damage and power outages from this event, Culbreath declared the town to be in a state of emergency.  He explained the move was made in an effort to keep citizens safe, saying, “It was the only way I could shut the town down.”  And that is exactly what the town is – shut down.  No businesses are open and citizens are encouraged to stay indoors, if possible.  Culbreath said that the north side of the town saw the most damage and that at last report, around 8:00 p.m., about 1200 people in the town were still without power.

Culbreath did not know when the state of emergency might be lifted for the town but said that he felt by the early morning it could possibly be lifted.  “Once we are truly in the clear,” Culbreath said is when he would feel comfortable making that call.

Culbreath said that the town of Edgefield, Edgefield County and different departments therein, and even local businesses are all taking part in the cleanup efforts in Johnston.  However, he warned the cleanup could take several days.

JET Opened as Shelter in Wake of Storms added by admin on April 5, 2017
View all posts by admin →