By admin on April 5, 2017Comments Off on State Championship Win by STHS Mock Trial Team 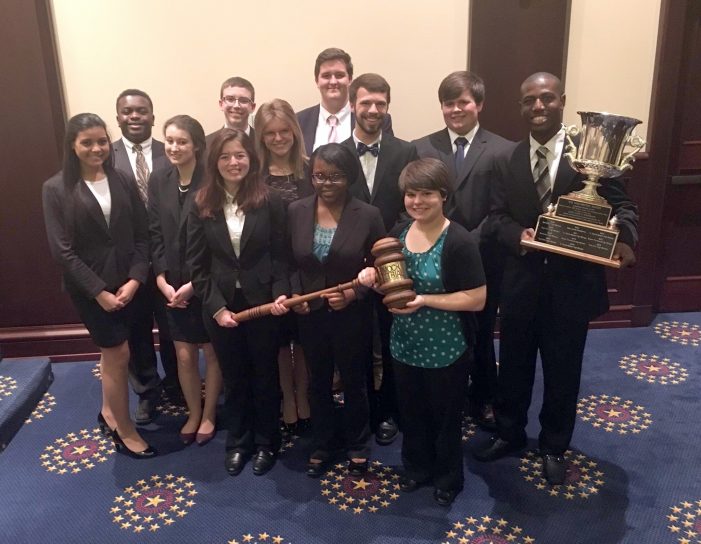 The final state championship round was close, but the Strom Thurmond High School (STHS) Mock Trial team defeated Socastee High School, an institution with a history of national champions. STHS clenched the 2017 Mock Trial State Championship, while competing against schools with resources and numbers beyond its own, earning accolades from judges and observers, and the Westbrook Cup and gavel. The team proudly displays these symbols of victory alongside five other cups and gavels. 2017 brings to six the number of state championship wins for the STHS Mock Trial Team. STHS has clinched the title in 1984, 1985, 1987, 2012, 2015, and 2017.

What brought the STHS Mock Trial team its state win? Madison Brawley, STHS tenth grader and MT attorney, stated “We’ve always been a team that pushes ourselves. We are unafraid to push boundaries and go outside the box as a team and family.” Maegan Carter, twelfth grader and MT witness, reflected, “The Mock Trial Association said two things about us.” Carter paused with a grin, “Strom Thurmond knows its stuff and we play well with others.” Both elements are critical to courtroom victory.

STHS senior Alana Caddell, a MT defense attorney, contributed, “This team has the incredible ability to adapt to changing trial circumstances.” Carter added, “We know how to argue objections, and we work well with each other. Because we spent time building relationships at the beginning, we can pull together when there is a hitch or something unexpected happens during the trial.”

Bonnie Watson, a mock trial plaintiff and defense witness, commented on the skills needed to succeed: “We are given a case and, as a witness, I must learn information about that person and become that character. I have to sense the right time to become emotional, when it is appropriate. I have to act out the part, and also not be a doormat. There is information I want the court to hear, and I have to figure out how to get that in the testimony.”

Denise Jackson, STHS teacher and Mock Trial coach for five of those six state wins, said about the competition, “Mock Trial is not for people who just like to argue to hear themselves talk. It requires thinking, reasoning, and research skills. Many, many students over the years have told me mock trial was the single most important thing they ever did in high school because it taught them to think.” Ninth grader Patience Clark supported Jackson’s observation by saying, “I was the bailiff / time keeper for the team. I learned so much this year. I surprised myself during the competition when I knew what objections needed to be made.”

Senior Traterrious Holmes and MT attorney shared a bit of his opening statement with this writer. Immediately his demeanor changed. Leaving a laughing, carefree teenager behind, he transformed into an articulate defense attorney, whose sober judgment could be trusted. His well-modulated bass voice stilled the classroom, saying “Does the flu vaccine cause Multiple Sclerosis? That is the question.” The surrounding team erupted into titters at his big grin, signifying his attorney mode was over.

Jackson points to Blair Massey, local Edgefield attorney, as an important part of the MT team. She has coached the team for over a decade on rules of evidence and objections. STHS drama teacher Steven McKinney is also a MT coach and is instrumental in the success of the STHS MT witnesses. While basking in the glow of their win, the MT team must pull together a whole new case for the Mock Trial National Championship held this year in Hartford, Connecticut, May 11–14, 2017.