REMEMBERING WW I — DECLARATION OF WAR

By admin on May 23, 2017Comments Off on REMEMBERING WW I — DECLARATION OF WAR 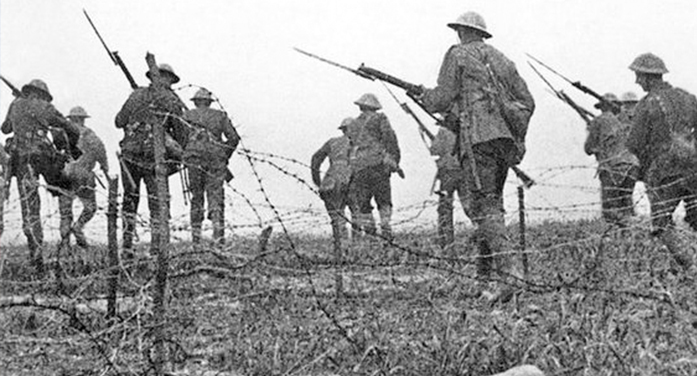 Overview: From circa late 1914, early 1915– Germany embarked upon “unrestricted submarine warfare” in the North Atlantic against “Allied Naval and Maritime Shipping engaged in trade with the allies.”  The “Allies” included (but were not limited to) Great Britain, France, Russia and the Ottoman Empire (later called Turkey.)  While this announcement included other seas in the world, we will focus on the North Atlantic, because the one thing that irritated and angered US Citizens the most were the immediate attacks on British shipping, most pointedly British Cruise ships carrying US private citizens back and forth to Europe. Also targeted were US ships flying the ‘stars and stripes” of the USA.  With the sinking of the British Cruise liner “Lusitania” after it had been torpedoed by a German U-Boat came the deaths of over 100 US private citizens.  This enraged Americans nationwide, and the unabated sinkings of various, flagged cargo ships carrying food, clothing and other supplies had a huge adverse effect on South Carolina, then a mostly agrarian State. Notwithstanding the USA’s status as a “neutral country.” the USA had become a major exporter of wheat, barley, corn, etc., to England and France.

Following the sinking of the Lusitania, the German Government was faced with the outrage of the American Public and of many members of both houses of Congress, the US Senate and US House of Representatives.  Thus, after a time, the German Government (representing the nautical power of the “central powers”– that included Germany, Austro-Hungary, and Italy) quietly relented on its Unrestricted Submarine Warfare against neutral shipping trading with the Allies.  However, as the war “stalemated” into a static, ”non-maneuver warfare” slugfest featuring ‘trench warfare,” Germany slid back into its earlier policy of attacking any neutral shipping – purportedly shipping foodstuffs, crops, and other supplies to the Allies. By late 1916, more American Lives, and much American cargo was being lost at sea, and the various states were clamoring for action.

President Woodrow Wilson — whose 1916 campaign slogan was “he kept us out of the war” (that had raged in Europe from August 1914 until Election Day in November 1916) – eventually was entreated by politicians of all stripes, newspaper editors and private citizens to “do something.”  Although later portrayed as a most reluctant warrior, President Woodrow Wilson eventually requested a DECLARATION OF WAR by the joint (both houses) of the US Congress, and on April 6, 1917, the joint bill or resolution of the full Congress was overwhelmingly approved. America at war.

Because of the paucity of training bases throughout the USA, the American Army was forced to postpone the active “orders to active duty” for even the earliest volunteers.  Interestingly enough, cool heads prevailed.

The day-today-life of Edgefield area people can be found in the ongoing series of Remembering World War I, redacted from the newspapers of that time. The date for the newspaper that follows the above Overview is April 11, 2017, appearing in the May 24, 2017, issue of The Edgefield Advertiser.

Jasper Talbert — Make one more gun for me.

“Yes Sir, I fought with Jackson and

Faced the fight with Lee,

But if this this old Union goes to war,

I was with them at Manassas, the bully

And heard the thunder roaring ‘round

And many a time this gun of mine has

Blazed the road for Lee,

But if this old nation’s in for fight,

I’m not so full of fighting, nor half so

As I was back in the Sixties, when I

Was at Bull Run.

It may be my hair is white-such things

You know must be-

But if this old Union’s in for fight,

I haven’t forgot my raising, nor how

Or thereabouts with battle shouts, we

Charged the boys in blue.

I say I fought with Stonewall and

fought them with Lee,

But if this old Union’s in for war,

Make one more gun for me.”

REMEMBERING WW I — DECLARATION OF WAR added by admin on May 23, 2017
View all posts by admin →