By admin on July 9, 2017Comments Off on South by Southeast: Spoof on Alfred Hitchcock’s Work 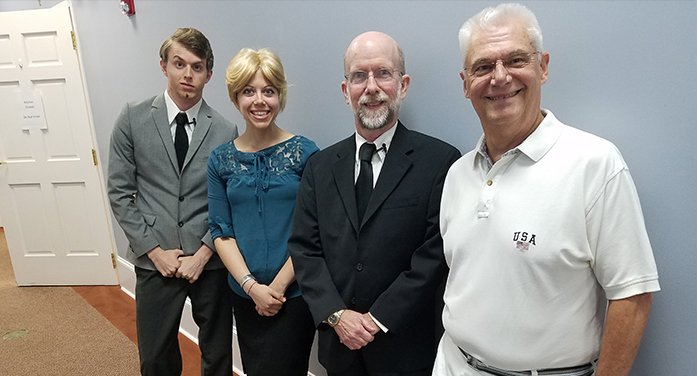 Directed by Dave Engelman, South by Southeast is a very entertaining, audience-participation play and a spoof on Alfred Hitchcock’s iconic film, North by Northwest.  “Hitchhike” himself, played hilariously by Sam Crouch, opens the show and silliness and trickery fall around us as Cary Grunt, played glowingly by Carson Faulker, is chased by blonds (Stephanie Turner is fabulous), planes, and bad guys!  This spoof brings back Cary’s co-stars from the black and white movie days with Tipsi Headspin, Doris Mayday, Eva Marie Sinner and Vera Mileage along with many more!

A ‘psycho’ train ride entails as Roger Hornthrill (a.k.a. Cary Grunt) is framed for the murder of Andre Odyssey, a famed tennis player.  Along the journey there is an uproarious detour to the Bates Motel where we even meet Bates’ mother (you’ll never guess who’s in the housecoat and gray wig).  Everything peaks after a (hilarious) famous chase scene that involves a cropduster plane and our hero Grunt and his gal make it up in a gondola and back down on foot of Mount Stonemore.

The fun is nonstop as audience participation takes over for commercial breaks and added comedy in the script.  Even the shyest of folk will enjoy joining in the fun.  Listen closely to the words spoken by our actors as numerous Hitchhike film titles buried in the script.  Truly an evening you won’t forget.

Director, Dave Engelman (far right) led these actors through a real success with a play on Alfred Hitchcock’s North by Northwest. They are, L to R, Carson Faulkner, Stephanie Turner and Sam Crouch, all veterans of the Edgefield County Theater stage.

South by Southeast: Spoof on Alfred Hitchcock’s Work added by admin on July 9, 2017
View all posts by admin →