By admin on April 22, 2018Comments Off on Dr. Felder Dorn Brings His New Book To Edgefield 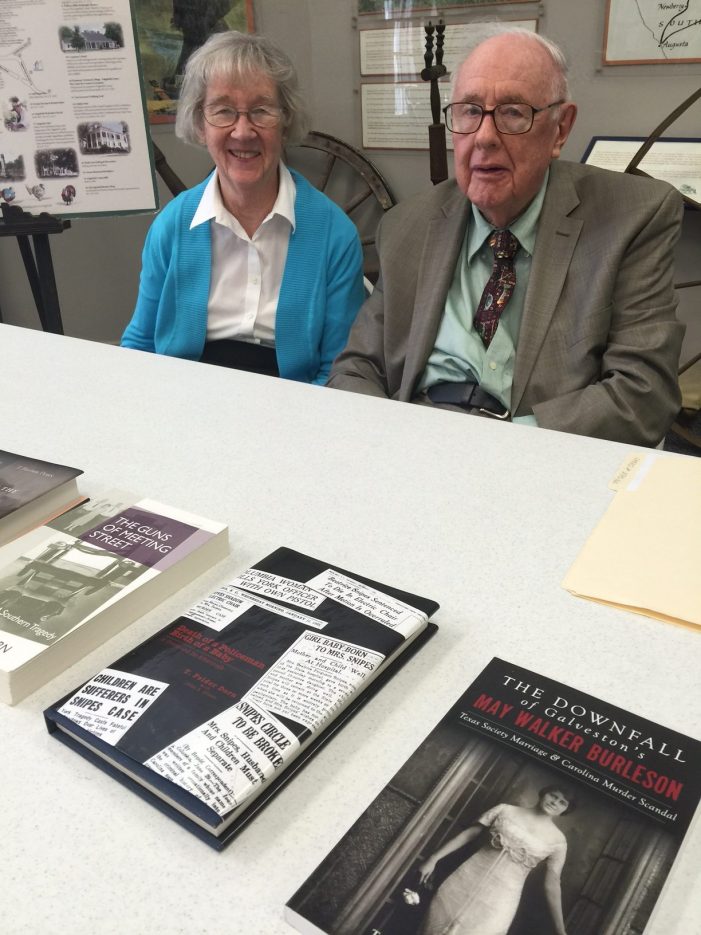 Sarah and Felder Dorn sit before his publications at the Tompkins Library on Saturday.

Felder and Sarah Ruth Dorn were a bright scene on the square as they made their way to Tompkins Library annex (Lynch building) where he signed books for an audience on Saturday, April 14. This was their first visit in several years, when he was here for the signing of Death of a Policeman; Birth of a Baby, in 2012. The town was pretty busy on Saturday with the opening of the Farmers Market and all the luncheon places were at top speed.  As a result the Dorns had to park on the other side of the square from the Library.

Once in the library Dr. Dorn was seated with the five books he has published spread before him as he awaited the 2:00 o’clock event.  Dorn, in his publishing career (he was a college professor of science), began writing first about the Edgefield Tompkins School and then The Guns of Meeting Street, which gives the story of the Logue and Timmerman feud. It also dealt with Sue Logue’s imprisonment in Columbia where the subject of his last two books also were also imprisoned. From that fact grew the last two of his books, Death of a Policeman and the Downfall of Galveston’s May Walker Burleson. With those books Dorn leaves the Meeting Street Road area of his first books.

A book given less notice in Edgefield, not being connected through Guns, is Challenges on the Emmaus Road (published 2013 by the University of SC Press) which deals with Episcopal Bishops and how they met with Slavery, Civil War and Emancipation.  The American Civil War had severed the Northern and Southern dioceses of the Protestant Episcopal Church.

On Saturday it was May Walker Burleson, the protagonist of his newest book, who was given attention.  She was in prison in Columbia when Sue Logue of Guns was there.  Her story goes: After twenty-nine years of marriage, Mrs. Burleson’s husband filed for divorce from her.  After the divorce in 1937, Burleson wanted her husband back, but he remarried.  On March 8, 1940, she shot the second wife at the Jefferson Hotel in Columbia.

The trial and May’s life afterward are discussed in the book, so it was quite expected when there was a question during the Q & A period — “What happened next [after the trial]?” Dr. Dorn answered, “Read the book!”

A review of the book can be found in this edition of the Advertise on page ———_.

Dr. Felder Dorn Brings His New Book To Edgefield added by admin on April 22, 2018
View all posts by admin →