Former Disney Actress & Granddaughter of Edgefieldian, in the White House

By admin on April 5, 2018Comments Off on Former Disney Actress & Granddaughter of Edgefieldian, in the White House 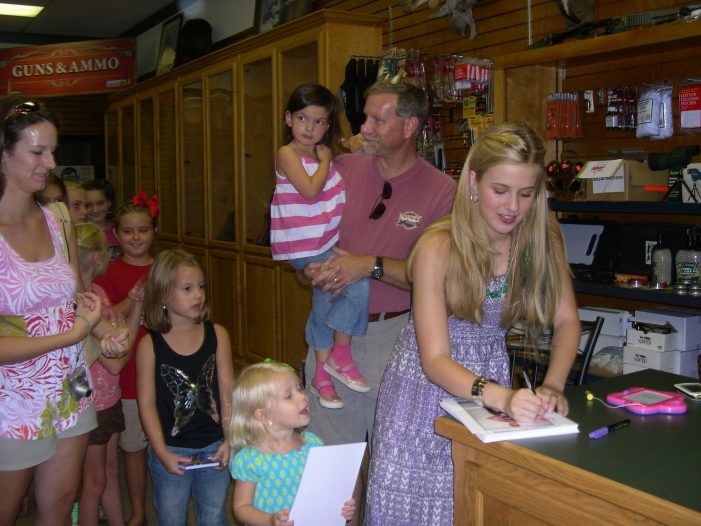 The story of Caroline Sunshine and her appointment to work at the White House hit the news stands on March 28, so said her father, Thom Sunshine, in a brief interview with the Advertiser on Thursday.  The spread of the news may have been a bit overwhelming for the family, but according to Caroline’s father, the parents are “very proud of her as she works to broaden her horizons.”

Caroline Sunshine recently joined the White House as a press assistant, as announced across the country on major TV stations and newspapers, from coast to coast, on March 28. In her early teens, Caroline worked as a star in Disney productions on television which put her in the world of glamour very early.  Edgefield met her, joined by her immediate family and Edgefield family (which included her aunt Beth Christie), in 2011, at age 14 (see Photo), she came to participate in an event at the NWTF’s Turkey Shoppe and Park Row Market 1.

Caroline left the world of Disney, TV and acting and went to college. In a brief interview with Caroline’s father on March 29, he pointed out that she took up serious studies at Claremont-McKenna College in California, where her parents and grandparents live, after graduation from high school. In college she chose to major in Government which led to what is happening in her life now.

It is important to note that her grandmother grew up here, Sylvia Quarles from the Westside, which makes Caroline’s story important to local folks who know well her kin people.

Thom Sunshine noted that there was some negative response to Caroline’s appointment, but that The Washington Post had treated Caroline well in the article that was published on March 18. At his suggestion, that they had the facts right, this newspaper chose the Post story and Mr. Sunshine’s interview to feed this story. On Wednesday the Internet took note of the “hullabaloo” over her hiring, many wondering about her credentials being good enough for the job– a beautiful young girl coming to the White House so early in her career.  However, the Post interpreted her assignment to the White House in this way: “But Sunshine’s latest career move really shouldn’t surprise anyone.  The 20-year-old former White House intern is no stranger to politics or the swamp, a point the White House emphasized in a statement amid all the hullabaloo over her hiring.” They go on to iterate that she was involved, in college, with the American Enterprise Institute, she interned for the Office of House Majority Leader Kevin McCarthy, the College Republican National Committee and the California Republican Party (all preparatory steps toward her new job).

Caroline’s family here, Beth Christie, noted that Caroline was born the year after her son, September 21, 1995, and therefore her actual age is 22 years old.

The press (Post in this instance) sees her role as not so glamorous – the main job being to provide administrative support for the entire White House communications department. The Post notes: “Press assistants – there are two others [in the White House], as well – are the busy worker bees pressing ‘send’ on White House news releases, wrangling the press pool (like literally corralling reporters from one location to the next), and setting up briefing calls.  It’s a gears-and-cogs job, albeit at the most powerful address on the planet.”

The Post sees equanimity in her “public” comments: “Sunshine hasn’t commented on any of the media attention – and her social media accounts aren’t overly partisan.”  The Post also noted: “It seems as if the former actress has already learned the first rule of the press team: Stay out of the spotlight.”

A very proud family is behind this young woman who is, according to her father, “trying to broaden her horizons.” Her mother, Karen Sunshine, is working for Notre Dame University in Indiana, and because they have a son finishing his senior year in high school, the father stayed behind with him in Orange County, Cal., until graduation when they are free to once again join together as a family.

Former Disney Actress & Granddaughter of Edgefieldian, in the White House added by admin on April 5, 2018
View all posts by admin →