By admin on April 9, 2018Comments Off on Line of Duty Death – Saluda Deputy Hallman 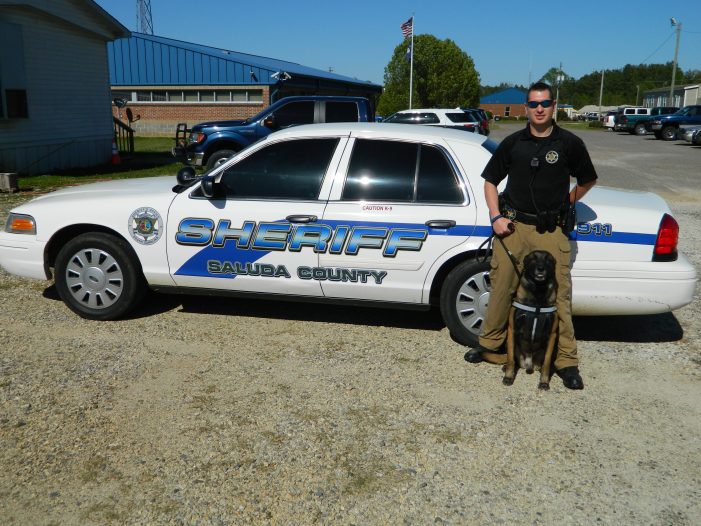 News of the death of a Saluda County Deputy Sheriff on April 6, a “Line of Duty Death,” according to Saluda County Sheriff John C. Perry. The Sheriff disseminated the following statements to the press.

“We lost one of our deputies last night/early this morning in a Line of Duty death.  The Uniform Road Patrol was in a vehicle pursuit with an unknown suspect that carried them just outside of Saluda County into Edgefield County.  The pursuit ended, and the suspect fled from the vehicle with a rifle and a child.  The minor child was released by the suspect and taken to safety by our deputies.  The supervisor on scene requested bloodhound support to track the suspect at this time.  One of our deputies, Corporal Dale Hallman, was responding to the scene as member of the Bloodhound Tracking Team with lights and sirens activated.  Corporal Hallman was involved in a single vehicle traffic collision.  Law enforcement, EMS, and fire personnel responded and Corporal Hallman was transported to Self-Memorial Hospital where he passed away due to his injuries sustained in the collision.”

Advertiser staff writer gives these details of the chase that resulted in a tragic death. The details of a car chase that led to the tragic death of a Saluda County Sheriff’s Office deputy have been documented in an Edgefield County Sheriff’s Office report, as the ECSO assisted the SCSO when the chase crossed over into Edgefield County.  According to the ECSO report, it was explained to the ECSO by the SCSO that they had received a call of shots fired in the area of the Town of Saluda during the late night hours of April 5.  A SCSO deputy then got behind a blue 1984 Pontiac, and when the deputy initiated blue lights in an attempt to conduct a traffic stop, the vehicle took off and the chase began.  The report states that one individual jumped out of the vehicle while it was still in Saluda County, and Saluda County took him into custody there.  The car chase ended in Edgefield County near a residence on Lynberg Drive.  The resident of that home called the ECSO to let law enforcement know that she had seen a man run through her yard and that the SCSO was on the scene at her home.  A SCSO deputy witnessed the subject, Clarence Jamar Mason, III, 31, of Saluda, exit the chased vehicle carrying a child in one hand and a rifle in the other.  Mason reportedly ran toward the home at the aforementioned address during which time he dropped the child off and continued to flee.  The SCSO Bloodhound Team was called to the scene, but the SCSO later decided to cancel the call out for that team since Mason’s identity was known.  Instead, since they had identified the subject, the SCSO decided to obtain warrants for his arrest.  The immediate scene and the home were searched, but Mason was not located.  Additionally, the juvenile involved in this incident was not harmed.  As note in our related story, CPL Dale Hallman died in a one car vehicle accident as he, a member of the SCSO Bloodhound Team, was responding to this incident.

A personal salute is given to Hallman by Perry in the following words: “Corporal Hallman will be remembered as a devoted law enforcement officer with five years of service at the Saluda County Sheriff’s Office.  In addition, he served the citizens of Saluda County as a Lieutenant in the County Fire Service.” Perry also notes that Hallman was awarded the Medal of Valor for his outstanding service to Saluda County.

He leaves behind a wife, unborn child, and two beloved step-sons; a mother, father and sister who are all natives of Saluda County. “As Sheriff, I would like to ask everyone to please lift up the Hallman Family, along with the Saluda County Sheriff’s Office with your prayers at this time.”