By admin on April 3, 2018Comments Off on Sheppard Mason Lodge Merges with Kadosh of Johnston 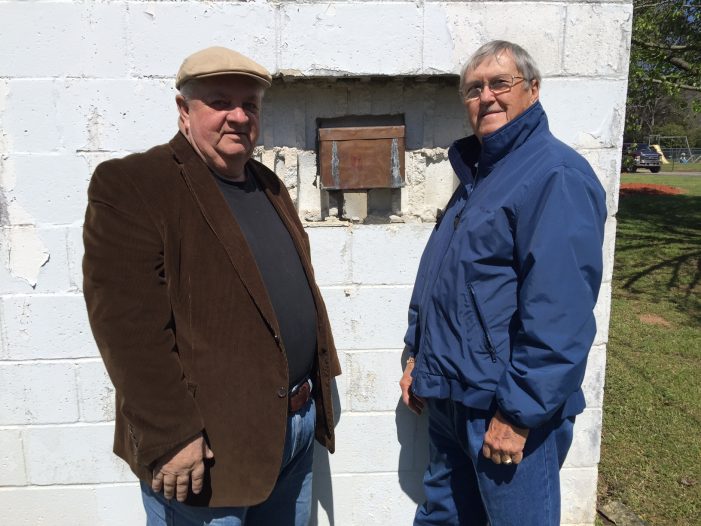 The Sheppard Masonic Lodge 320 of Trenton merged on January 1, 2018, with the Kadosh Lodge, No. 181 AFM of Johnston.  This was made official through the approval of the Grand Lodge of Masons of South Carolina AFM (Ancient Free Masons). The sale of the Trenton Mason’s building came about after the merger.  The two-story structure was built in 1952 following the sale of the land, owned by Church of Our Savior on Church Street, to the Trenton Lodge. This year, 2018, the building was sold back to the church by Sheppard Masons.

Sheppard Lodge was decreasing in size. One of the 10 smallest lodges in South Carolina, the Sheppard Lodge members were no longer able to handle the upkeep of the building. This left open the possibility of selling the land and building back to Our Savior.

In leaving the building, it was the Grand Lodge of AFM of SC’s wish to remove the corner stone (a marble plaque) from the building, and when they did they learned it housed a handmade copper box that held a time capsule.  Inside the capsule were the following, spelled out on a list verifying the contents: called the “Sheppard Lodge No 320, AFM,” the paper noted a History of Sheppard Lodge, List of Charter Members, List of Present Officers, List of Present Members (50) and a State newspaper of a corresponding date. The names of officers and members can be found at the end of this article.

Two gentlemen and dedicated Masons, representing the two merged groups, met with the press in order to make available to the communities of interest what they had discovered when opening this box. Sammy Rhoden of Ward is the Sheppard member, having lived in Trenton at the time of his entry into the Lodge, and he replaced the box into the outside wall to explain their surprise and pleasure in finding the box behind the marble plaque. He was assisted by Carroll Salter, also of Ward and a member of the Kadosh Lodge (Johnston), and together they spread the contents out of the box on a table inside; a photograph tells the story.

It was a unanimous decision among the Sheppard Lodge members to sell the building and join the Johnston Masons.  The Sheppard Lodge is closing its building and ending their Trenton identity in their centennial year: they were established in February of 1918. Sammy Rhoden of the Sheppard Lodge gave a great testimonial to Masonry.  He noted that their duties were to widows, orphans and community service.  Another service of theirs was to lay cornerstones in buildings. “Anytime a Masonic Lodge is open for meetings, the Bible is open also,” were Sammy’s words. He has been the historian for the Sheppard Lodge and is continuing to do research. “We have had some famous politicians to speak here at this lodge in Trenton,” he pointed out, “including Thurmond and Tillman.”

What now? In answer, Carroll Salter noted: “The two Mason groups are merging, Johnston and Trenton, and the time capsule belongs to the Sheppard Lodge and will go with them.”

Notes of Interest and Membership of Sheppard Lodge

“We worked under Dispensation from August 6, 1917, until February 14, 1918.  When our Charter was delivered to us by Bro. O. Sheppard Past Grand Master of the State of South Carolina 1900-1901.  And we named our Lodge Sheppard in his honor.

Sheppard Mason Lodge Merges with Kadosh of Johnston added by admin on April 3, 2018
View all posts by admin →