By admin on May 24, 2018Comments Off on South Carolina officials seek help finding one of ‘world’s worst’ invasive weeds 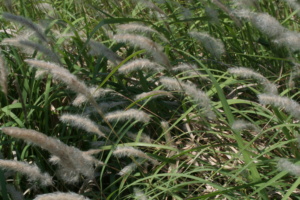 CLEMSON — Just as the weather warms, they pop their ugly heads out of hiding. But thank goodness they do, because now is the best time to find them so they can be destroyed.

The flowers of cogongrass are in bloom now, helping the invasive weed resume its aggressive spread to new fields and forests. Left unchecked, cogongrass will form dense stands over large areas and choke out native plants, doing untold damage to local ecology and to farmers’ fields.

“Cogongrass is in its bloom stage right now, so it’s in its most easily identifiable period,” said Steve Compton, an environmental health manager with the Department of Plant Industry (DPI) in Clemson University’s regulatory division. “It’s very difficult to destroy and attempts to do so can wind up spreading it further, so we ask that the public alert us to its presence so that we can effectively eliminate it.”

Native to Asia, Africa and Australia, cogongrass is considered to be one of the 10 worst weeds in the world. It first was found in South Carolina in 1987 in Hampton County, where it still is active today.

The Department of Plant Industry is charged with the eradication of this plant and has treated all reported infestations, but new sites are found each year.

The insidious species spreads both through small seeds and by creeping rootstalks called rhizomes, making it especially difficult to destroy.

Cogongrass has no natural enemies in South Carolina. Even goats turn up their noses at it. And trying to plow it under is likely just to spread its rhizomes even further.

“We want to take special precautions to make certain that when we find it, we eradicate it,” Compton said. “We ask that if a possible cogongrass population is found, landowners shouldn’t disturb the plants. If you suspect you have found cogongrass, please contact the Clemson University Department of Plant Industry by email at invasives@clemson.edu or by calling 864-646-2140.”

Cogongrass can virtually eliminate indigenous plants that provide food and shelter for birds, animals and insects. Like an assassin, it releases allopathic chemicals that will destroy desirable native vegetation and, if allowed, form large monocultures.

Across the South, some surveys have shown it is as pervasive as kudzu. The pest has an especially tight foothold in the southernmost states in the Southeast, from Louisiana to Florida.

“It disrupts native habitats for other vegetation that is food for livestock and wildlife,” said Sherry Aultman, who coordinates Clemson’s Cooperative Agricultural Pest Survey program.

“Nothing will eat cogongrass, so it has no benefit whatsoever.”

It’s also a fire hazard, especially when its leaves turn brown in the winter. “This stuff will go up like gasoline,” Compton said. “It’s a very hot-burning plant.”

“It interferes with prescribed burns in forestry,” Aultman said. “The economic impact of this pest is extensive.”

Cogongrass has been identified in 13 of South Carolina’s 46 counties, six of which are now free of the pest. Twenty-three known sites in six counties — Allendale, Beaufort, Charleston, Florence, Hampton and Williamsburg — are still active.

“Alert citizens play a very important part in keeping us safe,” Compton said. “We’re especially thankful for the volunteers who are willing to learn what cogongrass is, how to identify it and what to do when you find it. They are doing the state — not just its farm and forestry community, but its environmental and wildlife community, too — a tremendous service.

“While most know infestations of cogongrass have been eradicated, a small population still exists and the survey for unknown population continues year-round,” he said. “This is a plant we really wish to eliminate from our state.”

South Carolina officials seek help finding one of ‘world’s worst’ invasive weeds added by admin on May 24, 2018
View all posts by admin →