By admin on August 30, 2018Comments Off on RECENT NEW OWNERSHIP BRINGS CHANGE 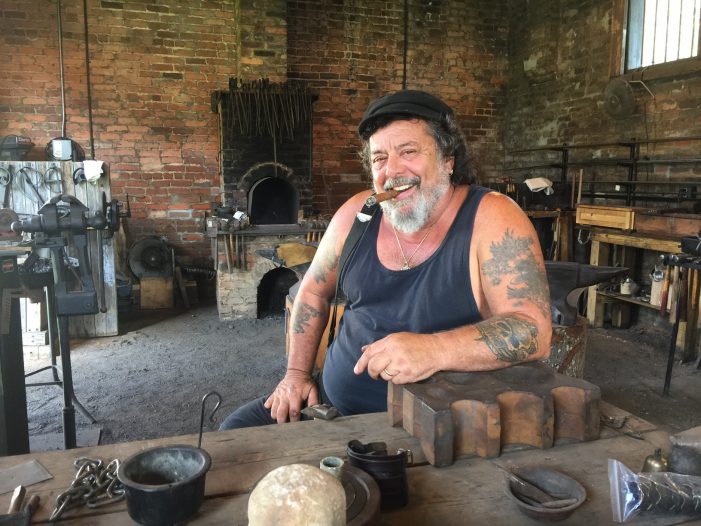 This is the first in a three-part series on new ownerships of buildings/businesses that are impacting the community.

Jake Jacobsen is a personality with talent, and his knowledge is available if one asks.

Matthew had not been interested in selling – holding sentimental value in that the shop was the first property his father bought as a young man.  Now, he said: “It was time to sell,” as he and his family no longer live Edgefield.

And, so, Jake and Amy, re-enactors in Pirate, Civil War, and Frontier type activities, are busy in our area joining in with other colorful re-enactors. And Jake plies his trade in his own building.

He has been gradually working on the building, one noticeable change is new doors that he put up.  They are made following the style of the old doors. And the old doors were repurposed. One store in Edgefield on Main St., has some of the old door wood as a backdrop. Other pieces are scattered over the shop as partitions of sorts.

He sat for the interview behind a waist high wall (mid way in the building) he has built of brick, topped with a granite sill that he found in Augusta.  It was part of the 1903 Union Station building.  This is an example of how, when replacing or adding, he tries to keep the elements within the age of the building.  The old Blacksmith Shop was built in 1917, just before the end of WWI, and 101 years ago.

He is slowly working toward developing a museum for the place.  He certainly has museum quality anvils, quite a few, arranged around the building.  Two were made in Germany (during the War, 1943) and England.  He has the original anvil used in the place by the earlier blacksmiths.

The original forge is there, “decorated’ with hammers and tongs of that time.  He has cleaned it out for use.  (Jake is a good teacher, and this writer learned quite a bit while interviewing him.) He uses bituminous coal as opposed to the anthracite which many here used in the early twentieth century before the entrée of natural gas to Edgefield homes.  The bituminous is cleaner (less Sulphur and fewer metal pieces found in it to catch hold of the metal being forged) and more desirable. He finds this coal in the Virginias unless there are blacksmiths around wishing to sell what they have.

There is another forge in place, one that he brought.  He has removed all of the equipment that had been brought in as new types of tools and machinery for blacksmithing – some being electrical.  He is going back to the originals in his shop.

He points out interesting machinery in his place.  One is a set of gears for putting steel on wagon wheels, to withstand the rocks and tearing road overlays that could break or damage a wooden wheel.  Being totally ignorant of early wheel development, he pointed out that it was the Romans who early on used this method of saving their wheels, with the metal “tire” protection.  The metal “tire” is formed with the gear machinery, the exact size of the wheel’s circumference, then heated in the fire which expands the size somewhat.  It is then placed on the wheel while hot, and as it cools it tightens to form the protective tire.  (WOW! Interesting stuff! Just glad we don’t have that as a transportation issue these days.)

In one part of the shop is a place for tools and useful metal utensils for the kitchen that he has made to sell.  (There is a great child’s gift, a meal prong for roasting marshmallows.) He says he also takes commissioned work.

One thing he seemed excited about is learning from Tonya Guy’s research that once there was an awning on the front (Jeter Side) of the shop.  He says evidence of the tooling is still there for the awning and he hopes to replace it one day, after some help from the Preservation group with potential grants.

Jake has done his homework. He points out the early blacksmiths: the first is Stafford Terry. In the early 1920s, McKinley Oliphant, remembered by many still living here, was the town blacksmith until his death in 1967. The shop was closed for some time after that.

Mr. Jacobson also names the more recent blacksmiths – mostly women and one man – who have enjoyed Edgefield’s Blacksmith Shop for making various things, among the items being jewelry. None of them were able to keep up regular hours for very long.  Jake Jacobsen lives 2 minutes away which allows a more predictable schedule that he follows, IF he is in town (they travel for the re-enactments).  He has the schedule posted, Thursday and Saturday roughly from 9:00 to 3:00 p.m. Because he lives just a few minutes away, he will open the shop, with prior arrangement, if someone has out-of-town visitors who wish to see it and hear his stories of blacksmithing.  He posts his phone number, as is done here: 303-818-5171.

JONATHAN, IF YOU WANT THESE PHOTOS BELOW I CAN SEND THEM

TWO- The double geared machine, made in the 1800s, makes steel “tires” for wagon wheels, one of many interesting pieces of equipment and tooling seen in the Blacksmith Shop on Jeter St. The new door is seen behind the gear machine.

THREE – A view of the original forge and tools on display in the Blacksmith Shop.  The large anvil, left to center, is the original in the shop.